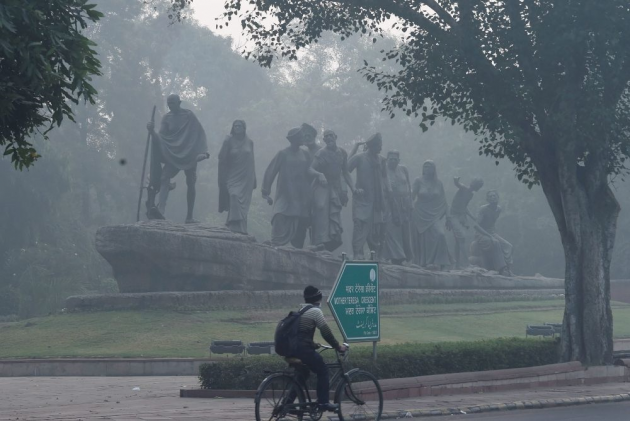 Delhi's air quality was in the upper end of the “very poor” category Wednesday morning, while pollution levels have already entered the “severe” zone in the neighbouring cities of Ghaziabad and Greater Noida.

Ghaziabad and Greater Noida recorded an AQI of 430 and 410, respectively.

The maximum wind speed is expected to be 12 kmph on Wednesday, according to the India Meteorological Department (IMD).

The minimum temperature was 8.2 degrees Celsius on Wednesday and the maximum is expected to settle around 27 degrees Celsius, the weather department said.

The minimum temperature this season has remained 2-3 degrees Celsius below normal in the absence of a cloud cover on most days, according to IMD officials.

Clouds trap some of the outgoing infrared radiation and radiate it back downward, warming the ground.

The predominant wind direction remained westerly-north-westerly on most of the days. These winds blow from snowcapped western Himalayas towards the plains.

Another reason for the below normal temperatures is La Nina, a phenomenon associated with the cooling of Pacific waters and an antithesis to El Nino.

Calm winds and low temperatures trap pollutants close to the ground, while favourable wind speed helps in their dispersion.

The central government's Air Quality Early Warning System for Delhi said the air quality is likely to remain in the upper end of the "very poor" category due to unfavourable meteorological conditions.

There is a possibility of the air quality reaching the "severe" category between December 4 and December 7, it said.

Mixing depth is the vertical height in which pollutants are suspended in the air. It reduces on cold days with calm wind speed.

A ventilation index lower than 6,000 sqm/second, with the average wind speed less than 10 kmph, is unfavourable for dispersal of pollutants.

The contribution of stubble burning in the neighbouring states to Delhi's PM 2.5 levels was 4 per cent on Tuesday, 7 per cent on Monday and 6 per cent on Sunday, according to the Ministry of Earth Sciences' air quality monitor, SAFAR.