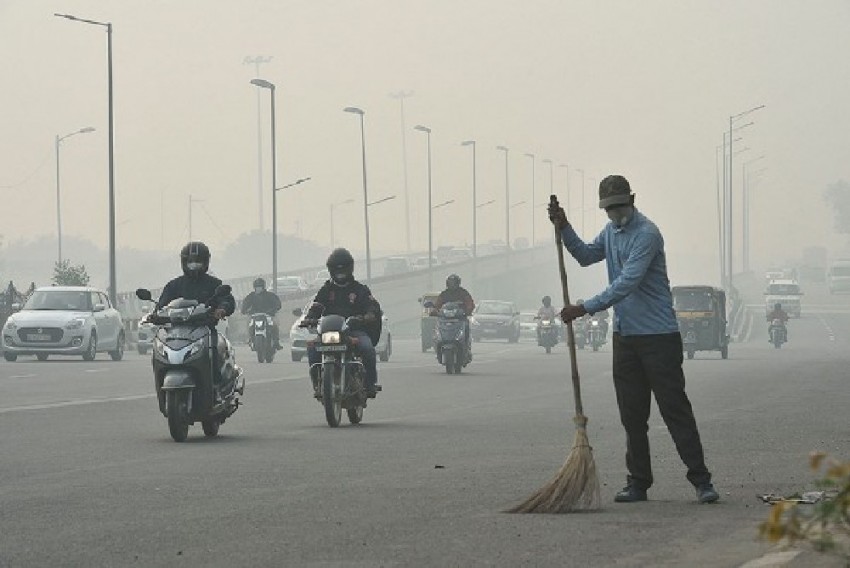 Delhi's air quality deteriorated on Friday morning with several areas in the national capital recording 'severe' levels of pollution, according to authorities.

The air quality index (AQI) on Friday was recorded at 374 as compared to 302 on the previous day.

The AQI for Delhi, however, is in the 'very poor' category, the Ministry of Earth Sciences' air quality monitor System of Air Quality and Weather Forecasting and Research (SAFAR) said.

Ten monitoring stations in Delhi entered the 'severe' zone, according to the AQI monitoring mobile application SAMEER, developed by the Central Pollution Control Board (CPCB).

According to SAFAR, extremely calm surface wind conditions prevail over the Delhi region and are forecast to continue for two days.

“This will lead to low ventilation conditions for an extended period and accumulation of pollutants near the surface. Further deterioration of AQI is expected for the two days," it said.

"It is forecasted that the air quality will be in the higher end of 'very poor' on 24th and 25th October and may touch the 'severe' category,” SAFAR said.

It said a significant increase in stubble fire count was observed around Haryana, Punjab, and neighbouring regions which stood at 1,213 on Thursday.

“However, as the boundary layer wind direction is not fully favourable for pollutant transport towards the Delhi region, the SAFAR model estimate of stubble burning share in PM 2.5 is 17 per cent for today,” it said.

According to the India Meteorological Department (IMD), the air quality will deteriorate further with pollutants PM 10 (presence of particles with diameter less than 10 micrometres) and PM 2.5 increasing.

PM 2.5 are tiny particulate matter less than 2.5 microns in diameter and can enter deep into the lungs and even the bloodstream.

“Air quality will deteriorate in the coming two days till October 24. There are factors other than farm fires which are worsening the air- like vehicular pollution, waste burning. PM 2.5 will increase and PM 10 which is now in 'poor' category will fall to 'very poor' by October 24,”

The figures are based on data collected from 34 monitoring stations in the city.

The Delhi government has kick-started its 'Red Light On, Gaadi Off' anti-pollution campaign for which it has deployed 2,500 environment marshals at 100 traffic signals across the city to generate awareness and curb vehicular pollution.

The drive will be implemented in all 70 assembly constituencies from October 26 and will go on till November 15 from 8 am to 8 pm.

It is an awareness drive by the Delhi government and no person will be issued challans, the government has said.