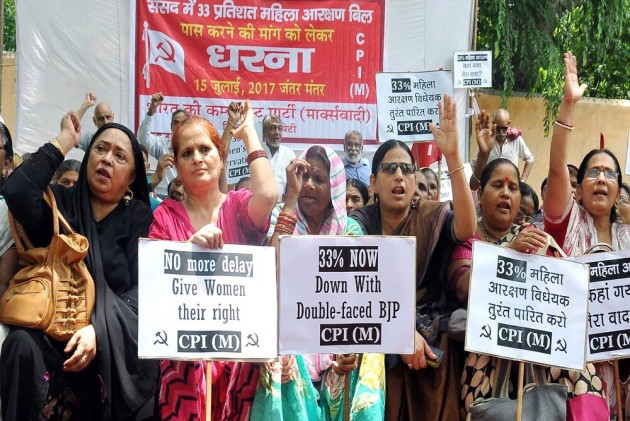 On the occasion of International Women's Day, several members of the Rajya Sabha vouched for at least one-third reservation for women in Parliament and state assemblies, the move shall ensure adequate representation of women.

The demand comes in the backdrop of a bill introduced earlier which sought to give 33 per cent reservation to women in Lok Sabha and state assemblies.

Rajya Sabha Chairman M Venkaiah Naidu on the occasion appreciated the services rendered by women members of the House for the country's development and prosperity.

"We need to ensure an environment that allows women to express themselves to their full potential in the form of both words and deeds," he said and wished them more strength and power.

The chairman also acknowledged the contribution of women citizens to the development of the nation.

Congress member Chhaya Verma recalled that the government of former prime minister Rajiv Gandhi had given reservation to women in local bodies.

Similar provisions should be made for women in state assemblies, Lok Sabha and Rajya Sabha, she said.

BJP member Saroj Pandey said that the government has taken various measures to empower women and highlighted the law against triple talaq.

She also said that the sex ratio of the country has improved because of the government's "beti bachao, beti padhao" campaign.

However, Congress' Phulo Devi Netam alleged that though the government has given the slogan "beti bachao, beti padhao", women are not secured anywhere.

Nominated member Sonal Mansingh made a case of celebrating 'international men's day' on the line of women's day.

Shiv Sena member Priyanka Chaturvedi was of the opinion that as women form around 50 per cent of the country's population, their representation in Parliament and state assemblies too should be in the same proportion, and not merely 33 per cent.

Fauzia Khan of the NCP said the beginning could be made by bringing the legislation on the 33 per cent reservation for women in Lok Sabha and Rajya Sabha.

She noted that many women heads of state and leaders were widely recognised and appreciated for their promptness and effectiveness in handling the COVID-19 pandemic.

Congress member Amee Yajnik claimed that 90 per cent of women in rural or urban areas are not aware that a day has been specially carved out for them.

"They do not know that there has to be a celebration on this day," the MP said.

"I wish that all women get access to all schemes, all rights that have been given by the Constitution, and that every empowered woman sees to it that another woman gets empowered," Yajnik said.

Sampatiya Uikey of the BJP said that there are 78 women members in Lok Sabha and 27 in Rajya Sabha.

She also said women are getting opportunities in all spheres of life.

Addressing a function to mark the International Women's Day at National Conference headquarters in Jammu, party president Farooq Abdullah slammed the BJP on Monday over the delay in the passage of the women's reservation bill in Parliament despite enjoying a majority.

Abdullah shared that the passage of the women reservation's bill would be the "biggest service" to the women in the country. Men could basically talk about empowering women, but they do not want it to happen, he added.

"The BJP is enjoying a majority in the Parliament and had passed farm bills and that of revocation of Article 370 even as the people were not in their favour. Why are they not passing this (women reservation) bill when the entire country wants it?" Abdullah asked.

"I will see whether they will pass it or not this time," the Srinagar MP said.