Three flights were diverted from Delhi airport on Monday morning due to heavy fog. 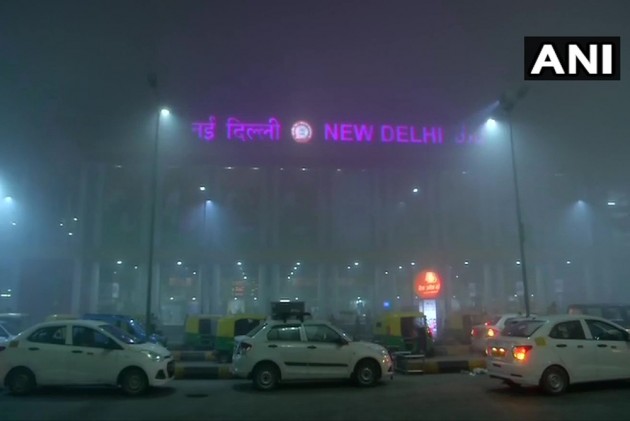 Three flights were diverted from Delhi airport on Monday morning due to heavy fog, an official said.

Flights are operating at the airport under CAT III B conditions, which means that the runway visual range (RVR) is between 50 metres and 175 metres. Normal operations have been suspended at Delhi airport due to poor visibility.

Giving an update on flight operations at 7 am, the airport official said there was dense fog but no "flight has been cancelled" yet.

A dense layer of fog enveloped the area in and around New Delhi railway station and as many as 30 trains are running late due to low visibility in the Northern Railway region.

Meanwhile, the air quality took a dip to 'severe' levels with AQI at 414.

According to the Meteorological Department, a significant increase in wind speed is also expected over Delhi-NCR from Tuesday evening under influence of approaching western disturbance and easterly winds in lower level, the department said.

From December 31 onwards, rain is likely in the capital city and its adjoining areas such as Noida, Gurugram, Ghaziabad and Faridabad.

Primarily due to the persistence of cold northwesterly winds in lower levels over northwest India, cold day to severe cold day conditions continues to prevail since December 15, 2019 in many pockets over Punjab, Haryana, Chandigarh, Delhi, and Uttar Pradesh, and north Rajasthan.

The mean temperature for December 2019 till Sunday was 19.07 degrees Celsius and it is "most likely to become second coldest December since 1901", behind 17.3 degrees Celsius in December 1997, the Met department said.