The oath was administered by Governor Bhagat Singh Koshyari at Raj Bhawan. 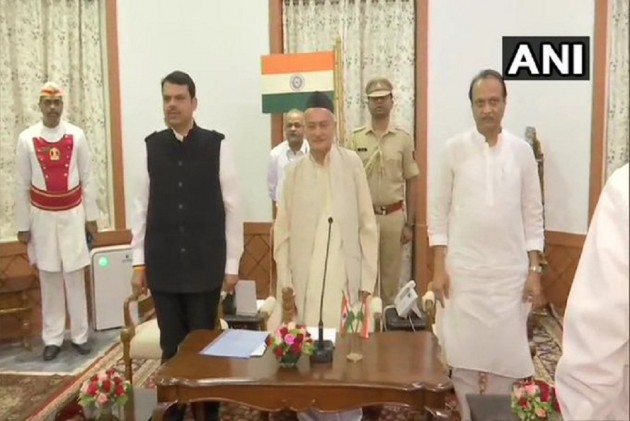 The oath was administered by Governor Bhagat Singh Koshyari at Raj Bhawan.

'Naturally Corrupt Party': Here's What BJP Said About NCP In The Past

'Taken To Oath-Ceremony Without Any Information': 3 NCP MLAs Lash Out At Ajit Pawar

Maharashtra Drama Far From Over, Pawar Says They Have Numbers To Form Govt

"People had given us a clear mandate, but Shiv Sena tried to ally with other parties after results, after which President's rule was imposed. Maharashtra needed a stable govt not a 'khichidi' govt," Fadnavis said.

Ajit Pawar, after taking oath as the deputy chief minister, said: "From result day on October 24, no party was able to form the government. Maharashtra was facing many problems, including farmers issues. So we decided to form a stable government."

The BJP, which emerged as the single largest party, could not stake claim to form a government as its ally Shiv Sena remained firm on rotating the Chief Minister's post and equal sharing of Cabinet berths.

Shiv Sena parted its ways with BJP to explore ways to form a government. It, however, failed to prove the support of the required number of MLAs in the time given by Governor Koshyari.

The Governor had then invited NCP, the third-largest party, to prove its ability to form the government failing which President's Rule was imposed in the state.