Didn't Know It Would Be My Last: Kejriwal Recalls Meeting Sheila Dikshit 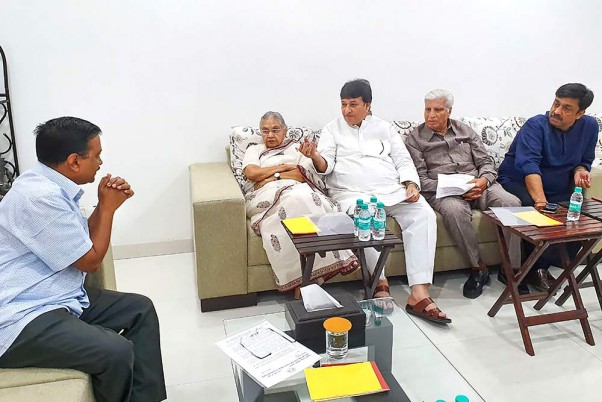 Hours after the demise of Congress stalwart Sheila Dikshit, her political opponents such as Chief Minister Arvind Kejriwal and BJP president of Delhi unit, Manoj Tiwari, on Saturday expressed grief and remembered her contribution to the development of the national capital.

While Kejriwal recalled his last meeting with Dikshit, Tiwari condoled her demise while reminiscing about her mother-like warmth.

Dikshit had served as Delhi's chief minister for three consecutive terms between 1998 and 2013 and was succeeded by Kejriwal.

Sheila Dikshit Was A Beloved Daughter Of Congress: Rahul Gandhi

In a tweet, Kejriwal said, "Just now got to know about extremely terrible news about the passing away of Sheila Dikshit ji. It's a huge loss for Delhi and her contribution will always be remembered. My heartfelt condolences to her family members. May her soul rest in peace."

Recalling his last meeting with his predecessor, Kejriwal said, "The news of the sudden demise of Mrs Sheila Dikshit ji has shocked me. Only last month I had met her for nearly an hour when she came with her party's delegation to submit a memorandum on several issues, at the end of the meeting I wished her good health, not knowing that this would be my last meeting with her."

"I came to know about Mrs Dikshit's health concerns last year when she had written to the Delhi government about her surgery requirements abroad, which was successful, but I could never imagine that she would leave us so soon," he said.

Meanwhile, Tiwari, while speaking to ANI, said "I had met her recently, it is a big shock. I remember how she welcomed me like a mother. Delhi will miss her. May God give her family and her closed ones the strength to bear this loss."

Dikshit, who died at 3.55 pm at a hospital in Delhi, is credited for the national capital's growing infrastructure including roads and flyovers and better public transport system.

The hospital, in a statement, said despite all resuscitative efforts, Dikshit died after a cardiac arrest.

The Congress stalwart's mortal remains have arrived at her home in Delhi's Nizamuddin East, and her last rites will take place on Sunday.