All preparations related to the biggest event in the religious calendar of the state had been going apace in anticipation of a token Rath Yatra. 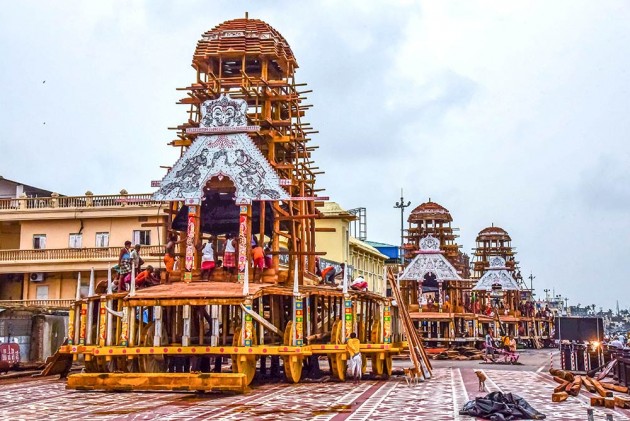 The Supreme Court’s decision to disallow the annual Rath Yatra this year in view of the Coronavirus pandemic has left millions of Jagannath devotees shattered and the priestly class fuming. The consensus among both devotees and priests is that the Odisha government did not try hard enough to convince the apex court that at least a token Rath Yatra could have been held without the participation of devotees.

“I am devastated at the Supreme Court decision. The last time the Rath Yatra was not held was nearly 300 years back and the reason then was external aggression. But cancelling the event without any such threat is thoroughly disappointing,” said Laxmidhar Behera, a devotee in Bhubaneswar. Behera’s views were echoed by devotees across the state. Many were seen breaking into tears on TV after coming to know about the cancellation of the eagerly awaited big event.

Acting on a petition filed by Odisha Vikash Parishad, a three-judge SC bench headed by Chief Justice SA Bobde today said; “We consider it appropriate in the interest of public health and safety of citizens to restrain the respondents from holding the Rath Yatra this year. We direct that no Rath Yatra will be held in temple areas of Odisha.”

The bench also rejected repeated pleas by intervenors, including solicitor general Tushar Mehta, for rituals associated with the Rath Yatra to be allowed in view of the religious sensitivities involved. CJI Bobde noted, “ Lord Jagannath will not forgive us if we allow this to continue. Activities related to the Rath Yatra are injuncted.”

All preparations related to the biggest event in the religious calendar of the state, including the making of the chariots, had been going apace in anticipation of a token Rath Yatra with the participation of only servitors and police. The servitors associated with the event had been tested for Covid-19 and had been put on isolation for over a month to ensure there is no risk of the virus spreading.

“There is little doubt that this was a sponsored drama enacted by the state government, which did not want the Rath Yatra to be held from the outset but did not want to be seen to be taking the call itself. That is why the state government counsel did not argue hard enough for the Rath Yatra to be allowed,” said senior servitor Binayak Dasmohapatra.

The Orissa High Court had recently advised the state government to consider holding the Rath Yatra with elephants or machines, instead of humans, pulling the chariots. But this suggestion did not figure during the deliberations in the apex court.

Asit Mohanty, senior journalist and a researcher on the Jgannath cult, is of the view that a token, ritualistic Rath Yatra could have taken place. “The whole of Puri could have been sealed to allow a ritualistic Rath Yatra. Cancellation of this all-important event, which draws lakhs of devotees from across the world every year, will certainly hurt the religious sentiments of millions of devotees and leave devotees thoroughly disappointed,” he told Outlook.

Most devotees and servitors are convinced that the Odisha government was behind the petition filed by Odisha Vikash Parishad in the Supreme Court seeking a stay on the Rath Yatra. “How come a little known organisation could afford an expensive lawyer like Mukul Rohatgi, whose fees for a day’s appearance run into lakhs? It is clear that someone else was footing the bill and the organisation was merely fronting for the state government,” said a devotee in Puri.

It remains to be seen how the state government, which is facing flak from every quarter for its lackadaisical approach to the whole issue, handles the fallout of the cancellation of Rath Yatra.