Trouble is brewing in the ruling BJP from a dozen legislators left out of Tuesday's cabinet expansion, as Chief Minister BS Yediyurappa could induct only 17 members. 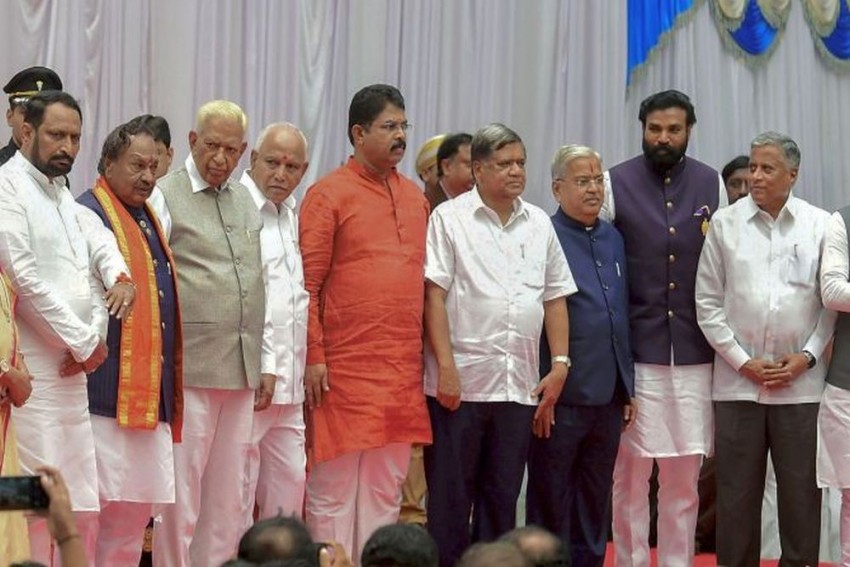 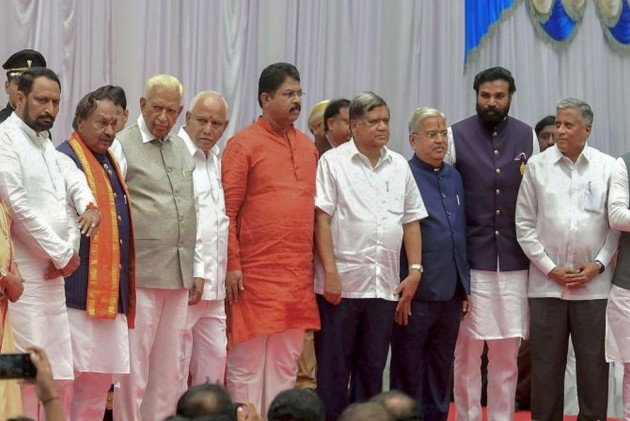 Trouble is brewing in the ruling BJP from a dozen legislators left out of Tuesday's cabinet expansion, as Chief Minister BS Yediyurappa could induct only 17 members, a party official said on Wednesday.

"Disappointment or resentment is natural from those who were expecting or aspiring for a cabinet post. Our leaders will meet them soon and address their concerns, as it is difficult to take all or even many of them," IANS news agency quoted BJP's state unit official G. Madhusudana as saying.

Of the 17 legislators inducted, one is an Independent (H. Nagesh) who pledged support to the party and other two from the party -- Kota Srinivasa Poojary is a member of the legislative council (MLC) and Laxman Savadi is not a legislator and has to be elected from an assembly segment or nominated to the council over the next six months.

Shashikala Jolle from Nippani in the state's northwest region is the lone woman minister in the cabinet, expanded over three weeks after Yediyurappa assumed office for the fourth time in the southern state on July 26.

"I am surprised for not being taken in the cabinet despite my seniority and experience as a minister earlier. I will wait till the next cabinet expansion and decide my future if the party does not need my services," MLA from Belagavi, Umesh Katti, said.

"Though I am disappointed for not being made minister, I hope to be rewarded in the next cabinet expansion or given a chairman's post of any board or corporation," Shetty told reporters at Mangaluru, west of Bengaluru.

The party has 105 legislators in the 225-member Assembly, whose strength is reduced to 208 after 17 rebel lawmakers of the Congress and the Janata Dal-Secular (JD-S) were disqualified for defying their whip and causing the collapse of their 14-month-old coalition government on July 23 after its chief minister H.D. Kumaraswamy resigned for failing to prove majority in the House.

"As only 34 legislators, including the chief minister can be accommodated in the 34-member ministry, 16 vacancies will be filled in the second expansion when some of them left out in the first round will be considered. If the party is unable to make them ministers, they can still serve the people as heads of state-run boards and corporations, which have a cabinet rank status," said Madhusudana.

The party has to also consider accommodating the 17 Congress-JDS rebels who resigned from their assembly segments and paved the way for the BJP's return to power in the southern state.

"Our party leadership will have to factor in the outcome of the Supreme Court ruling on their disqualification. After all, they have risked their political career and given our party a chance to govern the state again," asserted Madhusudana.

In the event of the party giving cabinet berths to some of the rebels-turned-BJP lawmakers, prospects of taking more dissidents or loyal members will be less due to the 34-member limit for the ministry, which is 15 per cent of the assembly's full strength of 225, including one nominated.

"Those old or new legislators denied cabinet berths will be offered the post of chairman of the 30 state-run boards and corporations, with their posting in Bengaluru," said the spokesman.

'Howdy, Modi' Event In Houston Sold Out, Over 50,000 People Register