Explaining To Them Benefits Of New Farm Laws: Piyush Goyal On Meetings With Farmers 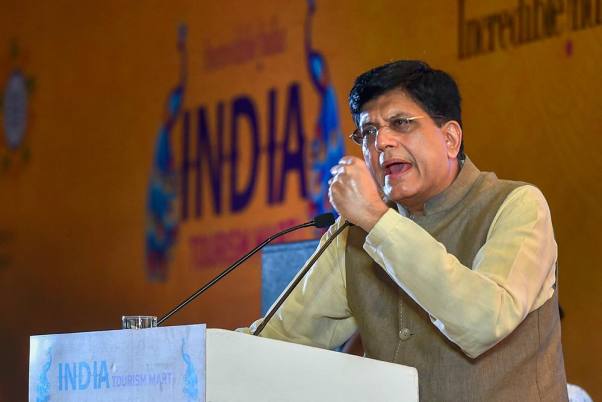 Union minister Piyush Goyal on Wednesday said he looks positively at the ongoing discussions of government with farmer unions as an opportunity to explain to them the benefits from the new farm laws against which they are protesting.

Goyal along with Agriculture Minister Narendra Singh Tomar and Minister of State for Commerce Som Parkash is holding talks with around 40 unions to break the deadlock over farmers' protest against the three new farm laws.

Addressing the 74th foundation day of Bureau of Indian Standards (BIS), Food and Consumer Affairs Minister Goyal said there are always different points of view to look at things and cited the example of the discussions with unions, which he said can be seen both as a problem or as an opportunity.

"There are always different points of view to look at things. No good work is easy and difficulties always come. Problems arise in everything, but it all depends on how we see things and how we deal with them. It is all about the point of view," he said.

The minister said he sees these discussions with protesting unions as an opportunity to explain to them the benefits of these legislations for farmers, their families and the entire country.

"For example, when I go along with Agriculture Minister Tomar for discussions with farmer unions, should I see that as a problem for myself or as an opportunity that I am getting," he said.

"I see that as an opportunity at those discussions to explain to farmers that the new laws are in their interest and in the interest of the country. I tell them that the entire country will benefit if farmers' income increases and their lives, as well as the lives of their children, will get better. That is my point of view to look at things," Goyal said.

Thousands of farmers are protesting for over 40 days at various Delhi borders, demanding the repeal of the three farm laws enacted in September 2020.

While the government has presented these laws as major Agri-market reforms aimed at improving farmers' income and making their lives better, the protesting unions find these Acts as pro-corporate and against the existing MSP and mandi systems.

Seven rounds of talks so far have failed to resolve the crisis and the next meeting is scheduled for January 8.

Besides, the Supreme Court is also scheduled to hear on January 11 a batch of pleas challenging the new farm laws as also the ones raising issues related to the ongoing farmers' protest at Delhi borders.