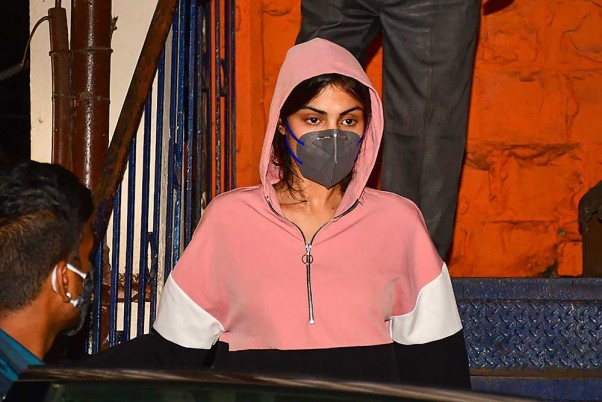 Actress Rhea Chakraborty on Tuesday requested the Bombay High Court to dismiss a petition filed by late actor Sushant Singh Rajput's two sisters to quash the FIR lodged against them for forging and procuring fake medical prescription for their brother.

Chakraborty is accused of abetting the suicide of Rajput, who was her boyfriend.

The actress, who is the complainant in the case against Rajput's sisters Priyanka Singh and Meetu Singh, filed an affidavit in the HC on Tuesday opposing their plea and said the allegations against them are serious.

Chakraborty also said since the probe in the case aginst Rajput's sisters is at a nascent stage, time needs to be given to the investigating agency.

In the affidavit filed through her advocate Satish Maneshinde, the actress said a forged and fabricated medical prescription was used to help Rajput procure medicines that are banned under the Narcotic Drugs and Psychotropic Substances (NDPS) Act.

"Rajput died merely five days after he obtained the said prescription, wherein he was unlawfully prescribed psychotropic substances at the behest of his sister (Priyanka) and Dr Tarun Kumar," Chakraborty said in her affidavit.

It needs to be investigated whether Rajput consumed the medicines prescribed, which may have contributed to his death and/or further deteriorated his mental health, the affidavit said.

The petition (of Rajput's sisters) should be dimissed, it said.

The petition came up before a division bench of Justices S S Shinde and M S Karnik which posted it for further hearing November 4 after both the CBI and the Mumbai Police, which had registered the FIR, sought time to file their affidavits.

The Bandra police here on September 7 lodged the FIR against Rajput's sisters and Dr Tarun Kumar of the Ram Manohar Lohia Hospital in Delhi, who signed the medical prescription.

Rajput's sisters in their petition filed on October 6 sought the case to be quashed and by way of interim relief prayed for a direction to the CBI, to whom the case was handed over by the city police, not to take any coercive steps against them.

The CBI is already probing a complaint lodged by Rajputs father K K Singh accusing Rhea Chakraborty and her family of abetting his sons suicide.

Chakraborty in her affidavit said Rajput had a "tumultuous relation" with his family and was also suffering from mental problems for which he was undergoing medical treatment.

In November 2019, Rajput was examined by three psychiatrists who all opined that he was suffering from bipolar disorder and prescribed him medications, the affidavit filed by the actress said, adding that Rajput was fine till he was having his medicines regularly.

"In January 2020, Rajput went to Chandigarh to meet his family. After he returned, he said he was discontinuing his medications and treatment," the affidavit claimed.

"In March 2020, when the country was hit by COVID-19 pandemic and lockdown was announced, Rajput appeared stable initially, but with each passing day his mental health started deteriorating," it said.

"The death of actors Rishi Kapoor and Irrfan Khan also had a tremendous impact on Sushant Singh Rajput who seemed to have spiralled into depression. He (Rajput) also refused treatment and/or medication," the affidavit said.

However, he (Rajput) continued consuming drugs, the affidavit claimed.

Rajput (34) was found hanging at his residence in suburban Bandra on June 14 this year.