DMK Pulls Off Stunning Lok Sabha Sweep, But Not In TN Assembly By-Polls

DMK leader M.K. Stalin’s words that there would be change of government both at Delhi and Chennai fell through as the BJP coasted to a massive win in the Lok Sabha elections while the AIADMK managed to retain its majority in the state Assembly. 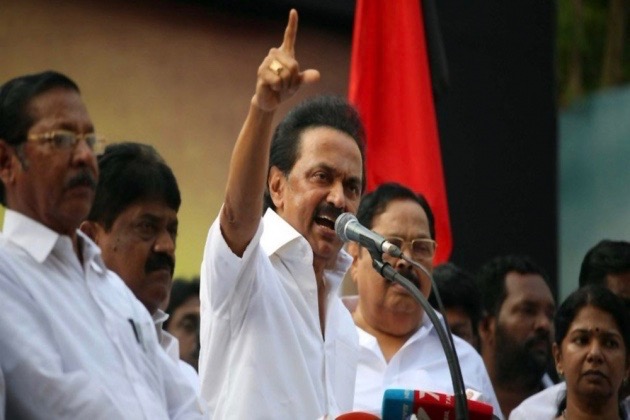 DMK leader M.K. Stalin’s famous words that there would be change of government both at Delhi and Chennai fell through as the BJP coasted to a massive win in the Lok Sabha elections while its ally the AIADMK managed to retain its majority in the state Assembly.

In Tamil Nadu the DMK led its front to a massive win in the Lok Sabha polls leading in 35 out of the 38 seats, but fell short in the 22 Assembly byelections as it could lead only in 11 seats. This left the EPS (Palaniswami) government with a comfortable majority in the Assembly as the AIADMK needed only 8 seats to stabilize itself.

With EPS firmly set to complete his term till 2021, the three dissident MLAs could also choose to remain with the AIADMK.

The results also saw the complete decimation of the three spoilers – TTV Dhinakaran’s AMMK, Kamal Haasan’s MNM and Naam Thamizhar Party as they failed to have any impact.

#TamilNadu: Celebrations outside DMK headquarters in Chennai; According to Official EC trends, DMK is leading on 22 seats pic.twitter.com/rWYr7DfBjQ

The Lok Sabha result would be a repeat of the 2014 results when the AIADMK won 37 out of 39 only to sit in the opposition. The DMK is similarly placed with none of its MPs in a position to be part of the Union Ministry, a huge change from 2004 and 2009 when it was an integral part of the UPA governments.

While the AIADMK would breathe a sigh of relief the party should also wonder what went wrong in the LS elections as the party’s share of 37 LS seats has fallen to just two. The party can take comfort that a friendly party is back in power at Delhi and would protect it from any attempt to destabilize its government in Tamil Nadu.

For the DMK, especially Stalin it is a loss of face since he was the only leader to have proposed Rahul Gandhi as PM candidate only to see the Congress leader fall in his own seat of Amethi. Thankfully Rahul’s win in Waynad came as a face saver even for Stalin.

The DMK’s main aim now would be to prepare the ground for the 2021 Assembly elections and taking on the incumbent government of the AIADMK would be the main battle. Along with that the anti-BJP approach may be too hard to resist even in a state election.