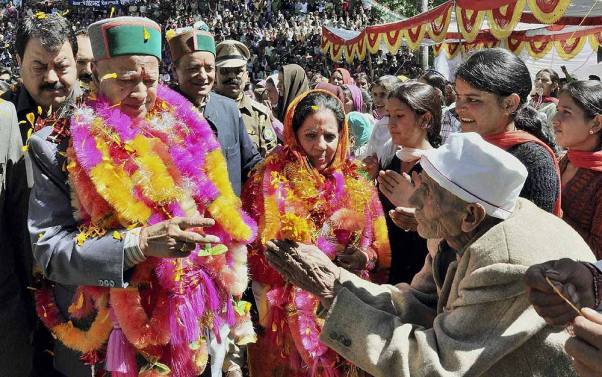 Death of six-time former CM Virbhadra Singh has somewhat dented Congress’ prospects in Himachal Pradesh. Many in the party feel that there is no potential leader of Virbhadra’s stature in the state. His wife Pratibha Singh, a two-time MP, has stepped out of the comforts of ‘Holly–Lodge’, Virbhadra's private bungalow, to contest the upcoming bypoll at Mandi. She hopes to encash sympathy among the public for her deceased husband.

Outlook’s Ashwani Sharma spoke to Pratibha Singh about her decision to contest the poll in the absence of ‘Raja Sahib’, as he was fondly called, and her role in continuing Virbhadra Singh’s legacy.

The interview has been edited for length and clarity. Excerpts:

Q. The BJP has questioned your decision to contest bypoll on the ground that a widow, as per old customs, is required to not step out of her home for at least a year.

A. What a foolish statement! This is an insult to a woman who has lost her spouse and yet has chosen to take that loss in stride. It’s such a grave loss, not just for me, as a wife, but also for the state. Do they want me to rot inside the four walls of my house, or do they want me to jump on the burning pyre of my husband and become a sati? Which world are they living in? Just see how much emotional support, love and affection my husband enjoyed. Most men and women who turn-up for my rallies are overwhelmed to see me among them. They want me to win the election and move on with my life. I can't replace 'Raja Sahib' but I will try to help the people and win their trust.

Q. Was it your own decision to contest?

A. Honestly, I never wanted to contest. Though at the same time I will say that no one pushed me to contest the election against my wishes. Chief Minister Jai Ram Thakur is telling people in poll rallies that I am a “majboor” candidate contesting under compulsions. This is absurd. Fact remains that it was the party's choice to field me. And then I made up my own mind after weighing in several factors. One of them was that after Raja Sahib’s death, the people had pinned a lot of hopes on me. They told me that I should step forward and contest this poll. I am not fighting the election for some position or for a political career. I am in politics to do social service.

Q. Are you missing Raja Sahib’s presence in the campaign?

A. This is the first election where I am managing things myself. When he was alive, he used to take care of everything - arranging finances, holding rallies, mobilising workers. He was everywhere, running the government while also managing the affairs of the party etc. It's a great loss .

Q. What major issues around which you have based your campaign?

A. There is definitely a sympathy wave in my favour. Raja Sahib had done so much development in the state during his 60-year-long political career. There was an all-round development in the state during his terms, whether it be as a Chief Minister or a four-time MP from Mandi or as a Union minister. Medical College at Ner Chowk (Mandi), IIT Mandi, Engineering college at Sundernagar, opening-up of ranges, divisions in Mandi and the massive health infrastructure. You name any project in the state, you will inevitably find him behind it.

Q. The BJP has fielded Brigadier (Rtd) Khushal Thakur –a Kargil war hero against you. How big is this challenge for you?

A. We are highly indebted to the Indian army for protecting the boundaries of our country. They made supreme sacrifices for the nation in major wars viz 1965, 1971 and in Kargil. But politics is a different ball game. Brigadier Sahib was in the army when Virbhadra Singh ji was doing development in the state, building roads and projects. I don't think he is a big challenge for me.

Q. Finally, how do you see your prospects in this election?

A. I am winning the election hands down. There’s no doubt about it. People here have come to mistrust the BJP and the tall claims its leaders make. Look at the prices of petrol, diesel, LGP and ration. People are really fed up with the soaring prices of essential commodities. Youths are not getting jobs. Unemployment has become a big curse for them. The promises which Prime Minister Narendra Modi and BJP made to the people have turned out to be empty promises. Chief Minister Jai Ram Thakur only flies in helicopters. He doesn't have any idea about the problems of the masses on the ground. The people are looking for a change. This result of this election and of the three other assembly bypoll being held on October 30, will certainly give BJP a reality check. BJP will realise that time has come for its leaders to pack their bags and be ready to leave in next year’s assembly polls.