Trump's decision to come to India without being assured that a trade deal will be on the table shows the value he gives to the country and PM Modi. 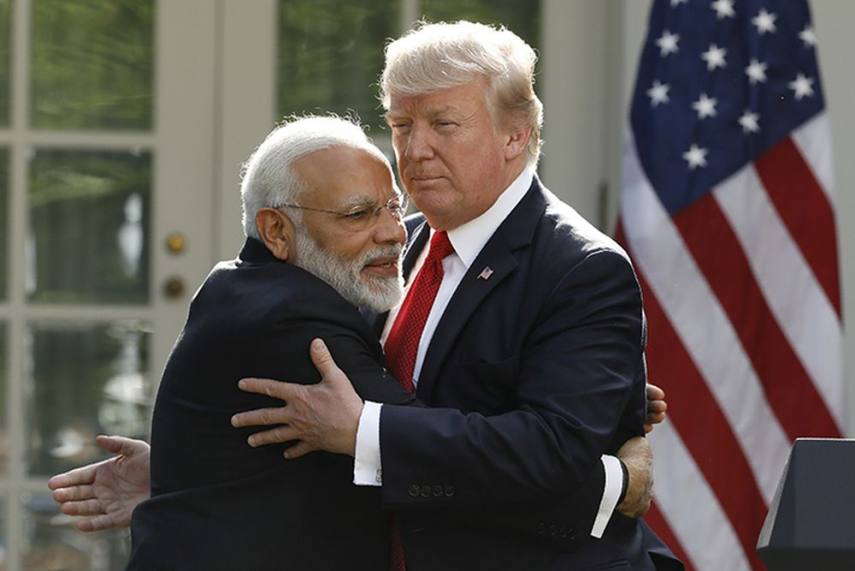 United States President Donald Trump will arrive in the country on Monday on a two-day state visit signalling further deepening of an already strong Indo-US relationship and placing India closer as an ally in America’s strategic scheme of things.

Fresh from his victory in successfully defeating a Democrat-initiated impeachment motion in the US Senate, a buoyant economy and a historically low unemployment rate, Trump is in an upbeat mood.

But the fact that he is in the middle of his campaign for the November presidential election and has taken a break to come to India, indicates both the country and its Prime Minister Narendra Modi’s value to the US President.

This will also be a rare, stand-alone visit by the US President. In the past, his foreign visits covered a number of countries together. The only exception he made so far was for Japan, whose prime minister, Shinzo Abe, is considered to be a close friend of Trump.

He will lead a 12-member strong delegation that will include his wife Melania, daughter Ivanka and his son-in-law Jared Kushner. The US Commerce Secretary Wilbur Ross, Secretary of Energy Dan Brouillette, Acting Chief of Staff Mick Mulvaney, National Security Advisor Robert O’Brien and the US Ambassador to India Ken Juster are among those in the US President’s accompanying team.

Trump will arrive at Ahmedabad airport where he will be received by Prime Minister Narendra Modi. The two leaders, along with the others in the delegation, are then scheduled to drive down to the Sardar Patel stadium—the world’s largest cricketing sports complex, with thousands of cheering people along his route to give him a rousing welcome. At the stadium with a capacity of over 1,25,000 people, the visiting President will be part of the gala “Namaste Trump” programme being organised by the Gujarat government.

Trump and his family are then scheduled to fly to Agra to see the Taj Mahal and later in the day, they will arrive in Delhi.

On Tuesday, apart from the ceremonial event and a possible visit to Rajghat, the two leaders will have a bilateral meeting with their respective delegations where a number of MoUs are scheduled to be signed.

The US President is scheduled to address a business meeting and also spend some time with the staff members at the US Embassy before going to the Rashtrapati Bhawan for President Ram Nath Kovind’s banquet. Trump and his delegation will leave India after the banquet.

Confusion and debate, however, remain on whether a trade agreement between the two sides would take place. While Trump has turned his “America First” policy into a major plank in his election campaign, for Modi, “ Make in India” is also the key to revive the economy and tackle the rising aspirations of young Indians.

While attempts are still on to ensure that at least a “mini” trade deal be signed and a detailed and bigger trade agreement be left for later. It is interesting that Trump has decided to come to India even without being assured that a deal will be on the table. The US President is notoriously transactional and drives hard bargains—including calling off visits to countries at the eleventh hour to register his disappointment when he fails to arrive at an agreement.

Some argue that his visit is meant to woo the Indo-American affluent diaspora from Gujarat. In the last US presidential election, over 77 per cent voters of Indian origin had voted for Democrat candidate Hilary Clinton. Only 16 per cent had opted for Trump. But his stocks have since risen and recent surveys show that nearly 36 per cent people of Indian-origin people now support Trump. Most of them are also supporters of the Indian PM and Trump’s stocks among them have risen after last year’s “Howdy Modi” event in Houston.

The “Namaste Trump” event in Ahmedabad may well be an attempt to reach out to the Indian-origin voters. But the signal emanating from Trump’s office certainly goes beyond that. It clearly shows the importance he gives to India and PM Modi and wants the country as its close ally as he deals with the various challenges at the global stage, especially in the Indo-Pacific region with a looming China threat.

Trump will be the fourth consecutive US President to visit India since Bill Clinton came to the country in 2000. He was followed by George W. Bush and Barack Obama. But before Clinton, the last American President to visit Delhi was Jimmy carter in 1978. While the past few decades show the upswing in Indo-US relations, it is also to be noted that both Obama and Trump have visited the country in their first term in office.

India’s attractiveness as a huge market and investment destination remains a major factor for the growing American interest. India’s increasing clout both in Asia and the international arena also plays a key role behind this shift in the US attitude.

This does not mean that there are no differences between the two sides. While their interests as two vibrant democracies and open societies have converged, there are a number of areas where the two differ. Pakistan and Afghanistan—especially with the recent US attempts to strike a peace deal with the Taliban, are serious areas of concern. The Americans are also worried about freedom of speech, human rights and the status of religious minorities in India under the Modi government.

Many of these issues along with the differences over trade and economic affairs will be raised in public and are likely to be used by the government’s detractors to embarrass it.

More importantly, Trump’s unpredictability and penchant to mock and embarrass even close friends through his tweets are unlikely to go away in a hurry.

But while an independent India is unlikely to give up its sovereign choice to expand its strategic options-- despite its growing closeness to the Americans-- the US establishment on its part will also continue to raise with India the issues that it feels strongly about.

Trump’s two-day visit is expected to be full of spectacle. But, it will also provide yet another opportunity for the world’s two large democracies to come closer and forge an even stronger bond.