Congress leader Rahul Gandhi said that there has been a systematic attack on farmers for some time now. 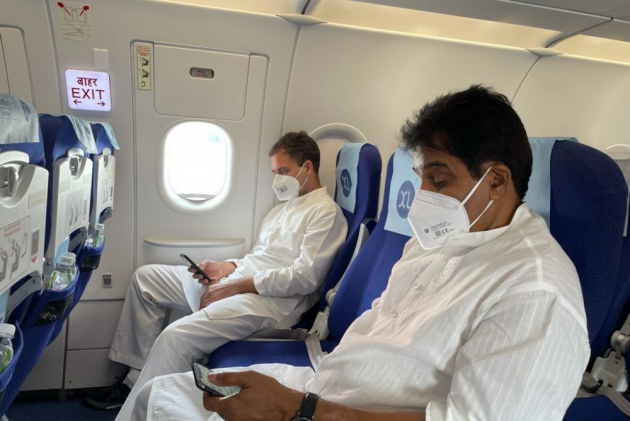 Congress leader Rahul Gandhi was stopped at the Lucknow airport while on his way to the violence-affected Lakhimpur Kheri in Uttar Pradesh. According to reports, he has left the airport after brief argument with the security staff there.

Earlier, Rahul Gandhi had said that he will visit the area on Wednesday along with two chief ministers.

Will Go To Lucknow With Two CMs: Rahul Gandhi After UP Police Denies Permission To Visit

“Three of us including two Chief ministers are going there. Let us see what happens,” he said. Gandhi also questioned the logic of applying section 144, which is applicable only if the gathering has five people.

“Why are politicians barred from going to UP? We have been told that we can’t go there. Chhattisgarh CM has been stopped. How can they apply sec 144? Section 144 only applies if there is a crowd of five people,” he said.

Rahul Gandhi said that there has been a systematic attack on farmers for some time now.

“For some time now, farmers have been attacked by the government. They have been looted, murdered by BJP’s Union Minister’s son. However, no action has been taken yet. On the other hand, systematic attacks have been happening to farmers. The first was reversing the Land acquisition Bill. The second is the passage of three farm Bills. That’s the reason they are sitting on the borders,” he said.

However, Rahul Gandhi didn’t dwell much on questions on Congress general secretary Priyanka Gandhi’s detention. On Tuesday, Uttar Pradesh Police booked Priyanka Gandhi Vadra and 10 others. The party has questioned her detention without an FIR. She has been booked under Code of Criminal Procedure (CrPC) sections 144,151, 107, 116 (preventive detention due to apprehension of breach of peace).

“Priyanka is in detention. The matter is of farmers. It doesn’t make much of a difference to us if we are manhandled, beaten up or put in detention. We have been trained like that. We are talking about farmers. Let them do anything to us,” he said, adding that he hopes to instil hope in the victim’s family.

“By visiting the family, we are trying to give them confidence. Today that family doesn't have hope. Today the farmer doesn’t have hope,” he said.

Gandhi also requested the reporters to desist from asking questions on Congress and others related to opposition unity. “This press conference is for the farmers. We have to respect the farmers who lost their lives,” he said.

Gandhi took potshots at the Prime Minister for not visiting violence-hit areas or the victim’s family.

“The PM was in Lucknow yesterday. But he didn’t go to Lakhimpur Kheri. Even postmortems of the killed weren't done properly,” he said.

India is under dictatorship, said Gandhi adding that all democratic institutions have been ruined by the BJP and RSS.

“Media is controlled and all the other institutions are being controlled. It's a dictatorship. Why I am saying this is because corruption and looting is happening on a large scale in all sectors. Farmers, common man, all have been looted. Petrol and diesel prices are going up,” he said.

Slamming the UP government for not taking action against the accused, Gandhi said that the state is witnessing a new kind of politics where the victims are put in jail and the accused are roaming free. Gandhi added that the Uttar Pradesh government was forced to take action in the Hatras gang rape case after Congress put pressure tactics.

“A new kind of politics is being played out in UP. It has happened in Hathras' case also. Criminals can commit any crime in UP whether its rape or killing farmers. Criminals roam around free whereas victims are put in jail,” he said.

Gandhi also questioned why the Congress is being denied permission to visit the area while other parties were allowed permission.

“We want to extend support to the victims’ family. Other parties are getting permission to visit the place. Not everyone has been stopped. TMC and Bhim Army visited the area. ‘What wrong did we do?” he asked.

He added that the duty of opposition is to apply pressure on the government to take action against the guilty.

“We put pressure on the government on Hathras' case. They were compelled to take action. If we hadn’t gone to Hathras, the rapists would have gone scot-free. Those who killed the farmers, should be held,” he said.

He also warned the government of serious consequences if it doesn’t allow democratic processes to happen.

The leader also said that he wants to understand the ground reality by visiting there.

“First of all, let me understand the ground reality. Nobody knows the reality now. There is a narrative being built by using the police and other forces. There is a limit to the narrative," he said.