The farmer leader Rakesh Tikait said the movement has begun and the youth are also joining the movement of farmers in the country. 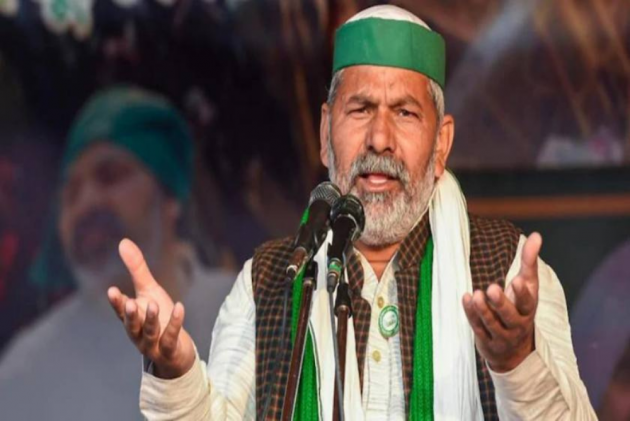 Farmer leader Rakesh Tikait on Monday emphasised that the solution to the ongoing farmers’ protest against Centre’s farm laws lies in dialogue instead of courts.

Several trains were cancelled, while highways and key roads were blocked as part of ‘Bharat Bandh’ called by famers unions in protest against the farms laws.

The 10 hours shutdown left thousands stranded for hours on Monday across India, particularly in the northern belt of the country.

Tikait said the 10-month-long protest, under the banner of Samyukta Kisan Morcha (SKM), is to prevent 'roti' from becoming a market commodity, and privatisation of the agriculture sector.

"I don't know what is going to be the end of this protest but the movement has begun and the country's youth, who often remained away from discussion on farming-related issues, is also joining it," he said.

In response to a query on the way forward, the BKU leader said, "The solution to the ongoing protests against the three agri laws of the Centre can be achieved only through dialogue and not in the courts of law."

He said the farmers' stir is not only against the three laws and for legal guarantee on the minimum support price for crops but also against privatisation of agriculture.

Hitting out at the BJP-led Centre, he alleged that the government has now "illegally" captured "several institutions" which the country has also understood now.

Speaking at the session earlier in the day, BJP MLA and Deputy Speaker in the Assam Assembly Dr. Numal Momin said the new laws are aimed at checking middlemen in the farming sector and benefitting both farmers and consumers.

He said the growth of farmers was important for the country's growth and some people opposed to the new laws now might realise their benefits eventually.

"PM Modi brought these laws to end the middlemen from the farming system. Also, the benefits, which earlier went to middlemen, would be passed on to consumers,” Momin said.

"It would take some time for some people to realise the benefits of these laws. Opposition to these laws is understandable. It's a democracy and some people who have some objections on some points are opposing the laws," he added.

Hundreds of farmers have been camping at Delhi's three border points -- Singhu, Tikri and Ghazipur -- since November 2020 under the banner of SKM, demanding that the three contentious farm laws be repealed and a legal guarantee provided to them on MSP of crops.

Tikait has been leading the charge with his supporters at Ghazipur on the Delhi-Uttar Pradesh border.

The Centre, which has held 11 rounds of formal dialogues with the farmers, has maintained that the new laws are pro-farmer. (With PTI inputs)