After conducting three-day tour to the border areas of Eastern Ladakh, the MP said, 'Under the leadership of Narendra Modi we the countrymen have full faith that not even an inch of Indian land would go away.' 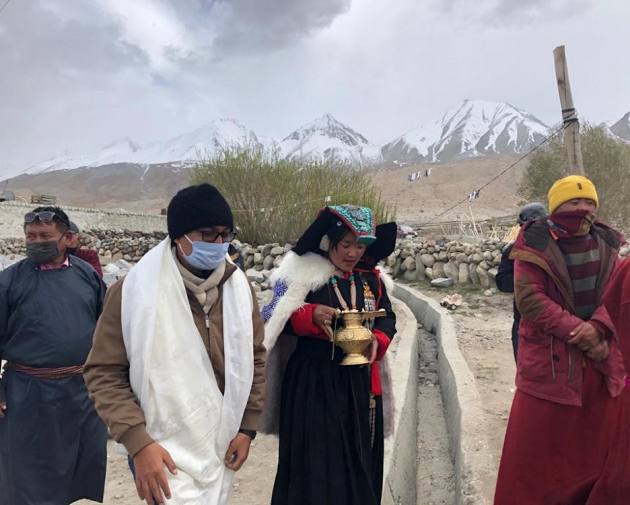 In the first statement after India-China face off in Galwan Valley, BJP member of parliament from Ladakh, Jamyang Tsering Namgyal, on Monday said border residents of Ladakh area want to live with peace and harmony essential for the overall development of the region and the nation.

“We don’t want any confrontation with our neighbouring countries and we strongly believe in peace, progress and prosperity”, the MP said.

After conducting three-day tour to the border areas of Eastern Ladakh, the MP said, “we have a very competent government at Center under the leadership of Narendra Modi as Prime Minister, who is very patriotic, dynamic and committed for the overall development of a well secured and very strong nation.”

3348 km Of Boundary To Share, Why India And China Can Never Be At Peace

“Under the leadership of Narendra Modi we the countrymen have full faith that not even an inch of Indian land would go away," he added.

He said he has full faith in the abilities of Defence Minister Rajnath Singh and that under his leadership, national borders have been boldly defended.

“As this year marks the 70th anniversary of the establishment of diplomatic relations between India and China, the two countries agreed for an early resolution of the border tension which will definitely contribute to betterment of the relationship and we are actively expecting a very positive atmosphere based on the dialogue at military and diplomatic levels”, Namgyal added.

The MP said he visited the forward areas and assured of safety, security and overall development of civilian residents of Pangong Lake near Line of Actual Control (LAC), where the tense situation prevailed since the standoff began. He said during his tour he visited Thakung and Chartse posts and examined the present situations at Finger 4 and other posts.

Namgyal also visited the last villages in the area including Phobrang-Yurgo-Lukung, Spangmik, Maan-Merak, Khagtad, Chushul and Shayok at Galwan Valley side. He  interacted with the civilians and listened to the public grievances, especially about the ongoing situation, a statement issued by the MP said. It said during his tour the MP  stayed overnight in Chushul, which holds prominence as this is the area where Indo-China 1962 war took place. He also interacted with the village representatives of the region.

Since the ongoing tensions started on May 5, this has been the second tour of Namgyal to the forward border posts. Earlier he visited Chumur, Hanley, Koyul, Demjok, Fukchey, Dungti and Tsaga.

He was accompanied on the tour by Tashi Namgyal Yakzee, Councillor of Tangtse in Ladakh Autonomous Hill Development Council, Leh, and other village representatives of the border areas.