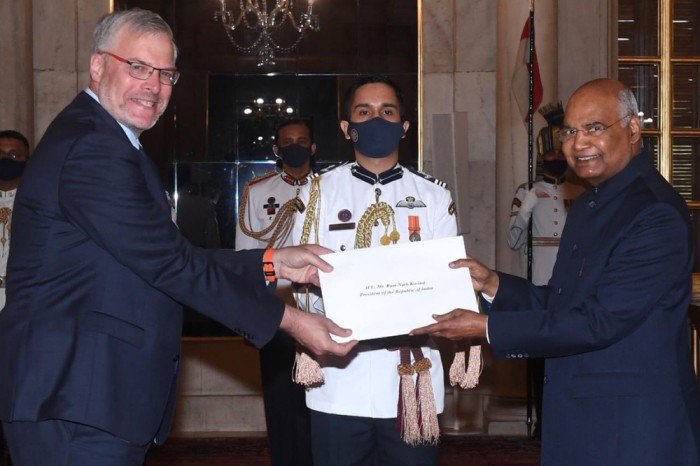 Israel’s brand-new ambassador to India Naor Gilon, who had recently presented his credentials to the President, Thursday made it clear that he did not wish to get into India’s domestic matters.

Gilon’s statement comes a day after the Supreme Court announced the setting up of an expert panel to look into the controversial Pegasus spy ware case where the government is being accused of spying on its citizens.

Gilon’s presser was planned days ahead.

In fact, he spent most of his time speaking about foreign minister Subramanyam Jaishankar’s recent successful visit to Israel and the latest quad announced by India, Israel, US and UAE, when the minister visited his country.

He said the latest quad was still work in progress and there was no military element involved. It was to promote trade, infrastructure and technology . Pegasus came up only during the question-and-answer session.

"This is the only main requirement...Under the requirements, they cannot sell it to non-governmental actors. What's happening here in India is an internal thing for India and I would rather not go into your internal matters," Gilon added.

It is by now well known that NSO only sells this sensitive technology to governments and not private individuals. Asked if the Indian government had approached the Israelis either in Tel Aviv or here in Delhi for cooperation on this issue, he chose not to answer.

He also dodged the question on whether Israel would be willing to speak to the Supreme Court appointed committee if it was approached. Gilon made it clear that he was uncomfortable talking on this issue.

In his opening remarks Gilon also spoke of the danger posed by Iran to the region and explained that it was not just Israel, but many of its Arab neighbours were concerned about Iran’s role in destabilising the region.

When reporters pointed out that India had excellent relations with Iran and there was growing convergence on Afghanistan now ruled by the Taliban, the ambassador said Israel was well aware of this. He said the quad workings will not be affected by India’s ties with Iran : "We are very much aware that India has its own interests when it comes to Afghanistan and Iran....I think that in discussions between countries, especially between friends, each country puts forward its own concerns and each country has its own interests, and then you see over time how it circles down, how it comes out.”

Like a perfect diplomat he explained that the quad was to promote ``positive’’ interests of all the four members.