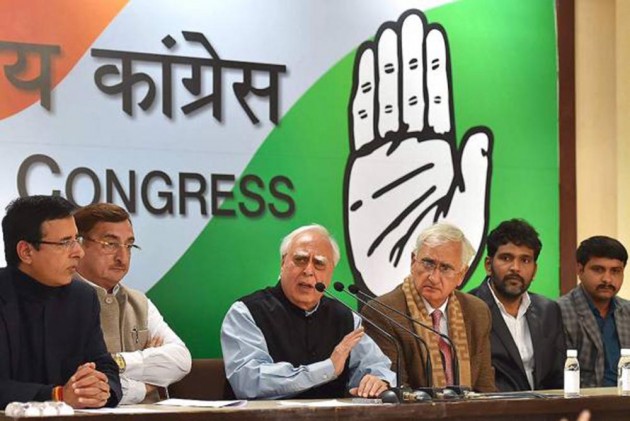 Mudslinging within the Congress after the party’s poor show in the Bihar Assembly elections increased manifold on Tuesday with senior party leader Salman Khurshid hitting out at his colleagues who raised demands for introspection within the party.

In a Facebook post that started with an Urdu couplet of Mughal emperor Bahadur Shah Zafar, former union minister Khurshid, who is among the leaders considered close to the Gandhi family, said if the mood of the electorate is resistant to the liberal values the party has espoused and cherished, it should be prepared for a long struggle rather than look for short cuts to get back into power. Citing the last Mughal ruler's couplet which talks about looking within for flaws that would make one not see others as flawed, he said Bahadur Shah Zafar's words might be a useful companion for many Congress leaders who suffer "periodic pangs of anxiety".

Some senior Congress leaders including Kapil Sibal had called for introspection after the party's dismal performance in the recently held Bihar assembly polls, after which the ruling NDA returned to power in the state despite the main member of the grand opposition alliance, Rashtriya Janata Dal, putting up a strong show and emerging as the single largest party.

Sibal, a former union minister had posted one of his interviews and tweeted, "We are yet to hear on recent polls... Maybe Congress leadership thinks it should be business as usual." Prior to this, Sibal was also part of a group of 23 senior Congress leaders who had in August written to party chief Sonia Gandhi suggesting ways revive the party.

My interview in today’s Indian Express

We are yet to hear on recent polls… Maybe Congress leadership thinks it should be business as usual: Kapil Sibal https://t.co/paYyFYUEud via @IndianExpress

Quite a few leaders from the RJD as well as the Congress have blamed the grand old party's below-par performance for the opposition alliance missing the majority mark in the Bihar assembly elections.

Tariq Anwar, party's general secretary and a veteran leader from Bihar, had earlier this week acknowledged that there were shortcomings due to which the Congress performed worse than other Mahagathbandhan constituents in the Bihar polls and asserted that the high command was serious about introspection as well as a thorough analysis of the results.

Noting that everyone in the party is perplexed and pained by the continuing misfortunes of the Congress that some have chosen to describe as "our misadventures", Khurshid said “there is something called faith, not necessarily blind, in destiny”. The favourite panacea of "doubting Thomases", introspection and collective leadership, might do no collateral damage but is a bit overestimated, Khurshid asserted.

"Our real redemption might be found in understanding the mind of the contemporary citizen, moulded by prevailing circumstances and influenced by a self-serving potion of social envy and suspicion, if not hate, fed by the ruling establishment," he added.

"If the mood of the electorate is resistant to the liberal values we have espoused and cherished we should be prepared for a long struggle rather than look for short cuts to get back into power," Khurshid said.

"If we are explicitly or implicitly willing to compromise with our principles to regain power we might as well pack up our bags. It is another matter that consolidation of our principled politics, like any cause, requires periodic re-appraisal and re-writing of strategy and logistics," he said.

Khurshid, in his post, said the battle for liberal India informed by the rich heritage of India’s humanistic traditions cannot be joined by feeble-hearted and those unwilling to embrace deprivation and sacrifice. "The noblest values of the freedom movement and the commitment of our Founding Fathers (and Mothers) stood out because of sacrifices borne in terms of life and property," Khurshid said. Great minds have self-doubt, not the arrogance of doubting the world around themselves, the former Union minister said.

Hitting out at Sibal, Gehlot took to Twitter and said that there was no need for Sibal to have publicly criticised the party leadership. "Congress has seen various crises including (in) 1969, 1977, 1989 and later in the 1996, but every-time we came out stronger due to our ideology, programs, policies and firm belief in party leadership. We have improved with each and every crisis and also formed UPA government in 2004 under the able leadership of Soniaji, we shall overcome this time too," Ashok Gehlot tweeted.

Congress has seen various crises including 1969, 1977, 1989 and later in the 1996 - but every-time we came out stronger due to our ideology, programs, policies and firm belief in party leadership.
2/

However, many other Congress leaders have come out in support of Sibal. Congress Rajya Sabha member Vivek Tankha said it was time for the party to act now, else it will be too late. He also said that for democracy to survive, the Congress has to survive. Tankha was also a part of the 23 leaders who had sought a reorganisation of the party. "Kapil ji is an iconic lawyer and hard core congress personality. Together and individually we have fought countless battles and continue to fight ag BJP shenanigans. For our democracy to survive Congress has to survive. Time to act is now or tomorrow may be too late," Tankha tweeted while tagging Sibal's interview.

My interview in today’s Indian Express

We are yet to hear on recent polls… Maybe Congress leadership thinks it should be business as usual: Kapil Sibal https://t.co/paYyFYUEud via @IndianExpress

Karti Chidambaram also pitched for introspection. Karti, son of former union minister P Chidambaram, in a tweet said: "It's time we introspect, ideate, consult & act @INCIndia."The Lok Sabha MP from Sivaganga in Tamil Nadu made the cryptic comment while tagging a tweet by Sibal on his interview.

The Congress won 19 out of the 70 seats it contested in Bihar as part of the RJD-led grand alliance. The opposition alliance ended up with 110 seats, while the NDA retained power bagging 125 seats in the 243-member assembly.