'Today, the world appreciates India's efforts in saving humanity. We should be proud of it,' said PM Modi 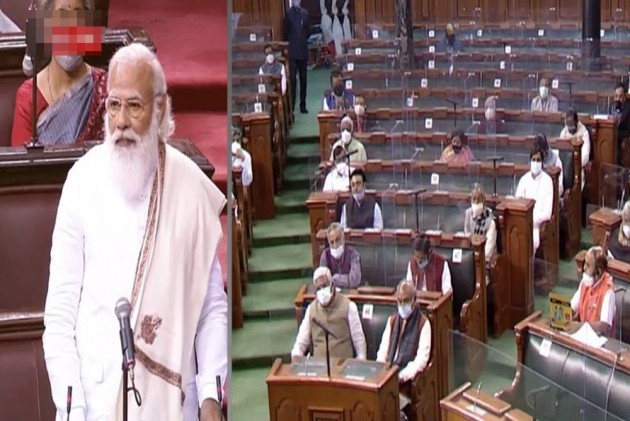 Prime Minister Narendra Modi on Monday replied to the Motion of Thanks on the President’s address during the ongoing Budget Session of Parliament. He said it would have been nice had everyone had listened to President Kovind’s address.

PM Modi slammed those calling agitating Sikh farmers names, saying it won't do the country any good as he went on to appeal to the protesting farmers to withdraw their over two-month-long stir and give the new agriculture reform laws a chance.

He also slammed the politics over the farm laws, saying opposition parties were mum over the reasons for the agitation.

Punning on the term FDI, which stands for Foreign Direct Investment, Modi said a new thing of FDI has emerged in India, which he said was Foreign Destructive Ideology.

"We need to be more aware to save the country from such an ideology," he said while replying to a discussion in Rajya Sabha on a motion thanking the President for his address to the joint sitting of Parliament at the start of the Budget session.

Modi vehemently denied that the laws will end MSP or the mandi system of crop procurement.

"MSP was there (in past). MSP is there (now). MSP will remain in the future," he said. "Also, affordable ration for the poor (through the public distribution system) will continue," he said, adding that mandis will be modernised.

Reeling out statistics, the prime minister said over two-third of farmers have small landholdings and the new laws give them the freedom to sell their produce anywhere, helping to realise the best prices.

Modi also criticised the opposition for not listing out the reasons that prompted the stir against the farm laws.

Expressing his gratitude towards all MPs present in Rajya Sabha, PM Modi recited a poem on Atmanirbhar Bharat. He said, “India is truly a land of opportunities. Several opportunities are awaiting us, so a nation which is young, full of enthusiasm and a nation that is making efforts to realise the dreams, with a resolve, will never let these opportunities simply pass by.”

"India has seen days when there was a large threat of polio, smallpox. Nobody knew whether India will get a vaccine or how many people will get it. From those days, we're now here, when our nation is making vaccines for the world. This increases our self-confidence," PM Modi said, adding that the country was once called a "third-world" nation.

He added, “World had apprehensions about how India would handle pandemic; lakhs would die they had apprehended. However, today, the world appreciates our efforts in saving humanity. We should be proud of it. India emerged as pharmacy of the world during a pandemic, delivered medicines to 150 countries,” he added.

TMC MPs meanwhile, staged a walkout, as PM Modi began his reply in Rajya Sabha to the Motion of Thanks on the President’s Address.

PM made a fervent appeal to protesters to end their agitation against the new farm laws even as he questioned opposition parties for their sudden "U-turn" on the agriculture reforms.

The Prime Minister also hit out at those behind the protests, saying a new "breed" of agitators has emerged in the country who cannot live without agitation and the country should be beware of them.

He also said the new FDI (Foreign Destructive Ideology) has emerged in the country and "we need to be more aware to save the country from such ideology".

Modi also stressed that India is very proud of the contribution of Sikhs and the language used by some for them will not benefit the country. He alleged that some people are also trying to defame Sikhs.

"This is a community that has done so much for the nation. The country takes pride in the contribution of Sikhs, but some people are trying to defame them. The words and blessings of the Guru Sahibs are precious. The language used by some for them will not benefit the country," he said, replying to the Motion of Thanks on the President's address in Rajya Sabha.