Durga Puja was particularly praised for its all-inclusive approach cutting across barriers of religion, gender and economic strata. 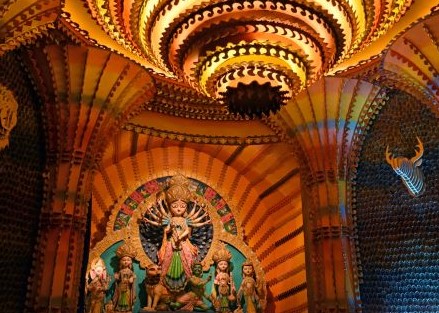 West Bengal has just bagged a new crown of glory for itself, with the United Nations Educational, Scientific and Cultural Organization (UNSECO) on Wednesday adding the state’s largest annual festival, the Durga Puja, to its ‘Representative List of Intangible Cultural Heritage of Humanity.’

The decision to inscribe ‘Durga puja in Kolkata’ in the list was taken on Wednesday, the second day of the 16th session of the intergovernmental committee, which is being held is Paris from December 13 to 18.

“The festival was particularly praised for its all-inclusive approach cutting across barriers of religion, gender and economic strata,” said an official of the Union ministry of culture who is posted in West Bengal.

The inscription on the UNESCO’S website reads, “Durga Puja is seen as the best instance of the public performance of religion and art, and as a thriving ground for collaborative artists and designers. The festival is characterized by large-scale installations and pavilions in urban areas, as well as by traditional Bengali drumming and veneration of the goddess. During the event, the divides of class, religion and ethnicities collapse as crowds of spectators walk around to admire the installations.”

The last time an Indian festival got this recognition with the Kumb mela in 2017 and Yoga in 2016. Traditional brass and copper craft of Punjab got the recognition in 2014, while Manipur’s Sankirtana ritual singing got it in 2013.

The Chhou folk dance of Purulia district of West Bengal got this recognition in 2010, along with Mudiyettu, ritual theatre and dance drama of Kerala and Kalbelia folk songs and dances of Rajasthan. In other years, Kutiyattam Sanskrit theatre, Ramlila, Tradition of Vedic chanting and Buddhist chanting of Ladakh have found this recognition.

Earlier, in September, the West Bengal tourism department had forwarded a proposal to the union ministry of culture, which subsequently supported the state’s proposal and placed the matter before the UNESCO.

“Durga Puja in #Kolkata has just been inscribed on the #IntangibleHeritage list! Inscriptions to the Representative List are one of the several ways by which #UNESCO advocates the promotion and safeguarding of intangible cultural heritage,” UNESCO New Delhi’s Twitter handle said on Wednesday evening.

Durga Puja in Kolkata has just been inscribed on the #IntangibleHeritage list.

Chief minister Mamata Banerjee, too, has repeatedly said that she wanted this inscription and sought the Centre’s approval.