It comes barely a week after cyclone 'Tauktae' battered the western coast leaving behind a trail of destruction. 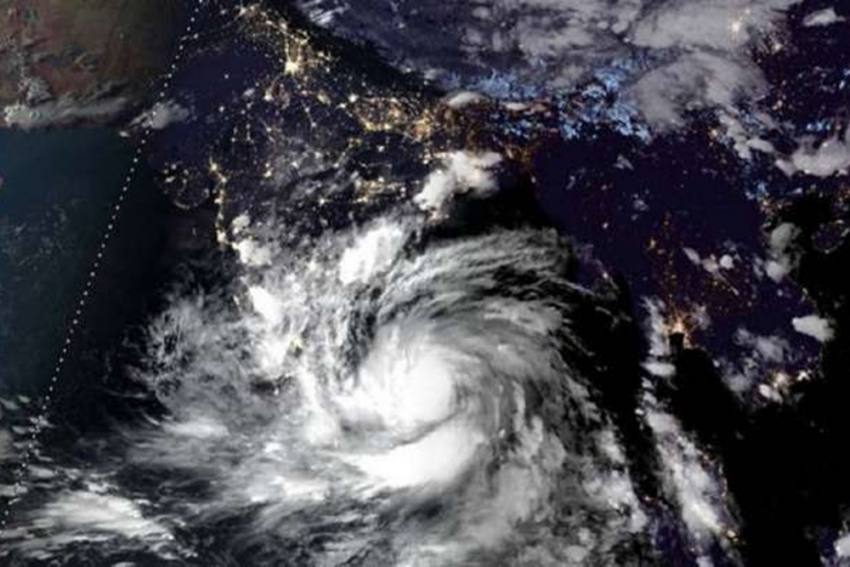 The governments of West Bengal and Odisha have begun the process of evacuation from the eastern coastal areas as the India Meteorological Department (IMD) has said that Cyclone Yaas is likely to be 'very severe with landfall and heavy rain.

The IMD) said on Sunday that the cyclone is likely to make landfall on May 26 evening between Paradip in Odisha and Sagar islands in West Bengal after intensifying into a ‘very severe cyclonic storm’ with wind speed ranging from 155kmph to 165 kmph, gusting to 185 kmph.

It comes barely a week after cyclone 'Tauktae' battered the western coast leaving behind a trail of destruction.

Prime Minister Narendra Modi on Sunday chaired a high-level meeting to review the preparedness of the state and central agencies to deal with the situation and called for a timely evacuation of those involved in offshore activities.

The government has sarted airlifting rescue and relief teams and keeping defence aircraft and naval vessels in readiness. The armed forces too are on alert with the Navy putting on standby four warships and a number of aircraft. The Indian Air Force (IAF) has kept 11 transport aircraft and 25 helicopters ready to carry out humanitarian assistance and disaster relief operations as part of preparations to deal with the situation arising out of Cyclone Yaas, officials said.

The IAF airlifted 21 tonnes of relief materials and 334 National Disaster Response Force (NDRF) personnel to Kolkata and Port Blair from three different places on Sunday as the government initiated a series of measures to tackle the cyclone that is brewing in the Bay of Bengal, they said.

The Indian Navy had said eight flood relief teams and four diving teams are positioned at Odisha and West Bengal to augment the existing resources. Four naval ships have been put on standby with humanitarian assistance and disaster relief materials and medical teams.

"Naval aircraft are kept ready at naval air stations INS Dega at Visakhapatnam and INS Rajali near Chennai to undertake an aerial survey of the affected areas, casualty evacuation, and airdrop of relief material as required," the Navy said in a statement on Saturday.

The West Bengal government earlier said it has taken all precautionary measures and Chief Minister Mamata Banerjee will stay at a control room set up for the purpose to monitor the situation.

The state government has placed 14 districts including Balasore, Bhadrak, Kendrapara and Jagatsinghpur on alert.

"It (the depression) is very likely to move north-northwestwards and intensify into a cyclonic storm by 24th May morning and further into a very severe cyclonic storm during the subsequent 24 hours.

"It would continue to move north-northwestwards, intensify further and reach Northwest Bay of Bengal near West Bengal and north Odisha coasts by 26th May morning," the Cyclone Warning Division of the IMD said.

"It is very likely to cross north Odisha-West Bengal between the Paradip and Sagar islands by the evening of 26th May as a very severe cyclonic storm," it added.

In West Bengal, the coastal districts of East and West Midnapore, South and North 24 Parganas, along with Howrah and Hooghly will experience light to moderate rainfall in most places with heavy to very heavy downpour at one or two places from May 25.

On May 26, the spread and intensity of rain will increase with the possibility of "extremely heavy rainfall" in Jhargram, East and West Midnapore, North and South 24 Parganas, Howrah, Hooghly and Kolkata, said Sanjib Bandopadhyay, the deputy director of the Regional Met Centre in Kolkata.

"Heavy to very heavy rainfall will occur in Nadia, East and West Bardhaman, Bankura, Purulia and Birbhum," he said.

Heavy rain will also occur in Murshidabad, Malda and Dakshin Dinajpur districts of the state, he said.

Bandopadhyay said that heavy rain is likely in the sub-Himalayan and western districts of the state on May 27.

Odisha would experience light to moderate rainfall at many places with heavy rainfall in the north coastal districts from May 25, the India Meteorological Department (IMD) said.

Heavy to very heavy rains are likely to occur at a few places in the state with extremely heavy rainfall in districts such as Balasore, Bhadrak, Kendrapara, Mayurbhanj on May 26, it said.

Squally wind speed reaching 40 to 50 km per hour gusting to 60 kmph is very likely to prevail over north Bay of Bengal and along and off Odisha, West Bengal and Bangladesh coasts from May 24 evening, he said.

The wind speed will gradually increase thereafter, reaching 90 to 100 kmph gusting to 110 kmph in the afternoon of May 26, Bandyopadhyay said.

"It will increase to 155 to 165 kmph when it crosses the coast on May 26 evening," the deputy director said.

Light to moderate rainfall will be experienced in most parts of Andaman and Nicobar Island, with heavy to very heavy rainfall at isolated places on May 24, the IMD said.

Tidal waves of 1-2 meter height are very likely to inundate low-lying areas of Andaman and Nicobar island on May 24, it said.

Prime Minister Modi asked officials to work in close coordination with the states to ensure the safe evacuation of people from the high-risk areas and stressed the need to ensure that the time duration of outages of the power supply and communication network is minimum and these links are restored swiftly, a statement issued by the Prime Minister's Office (PMO) said.

Modi also asked the officials to ensure proper coordination and planning with the states to ensure that no disruption is caused to the treatment of COVID-19 patients in hospitals and vaccination against the viral disease.

He called for involving various stakeholders such as the coastal communities and industries by directly reaching out to them, the PMO said.

Cyclone Tauktae left over 100 people dead and damaged thousands of houses in Gujarat, Goa, Maharashtra, Karnataka and Kerala. Besides at least 70 people have died after a barge sank in the Arabian Sea during the storm.