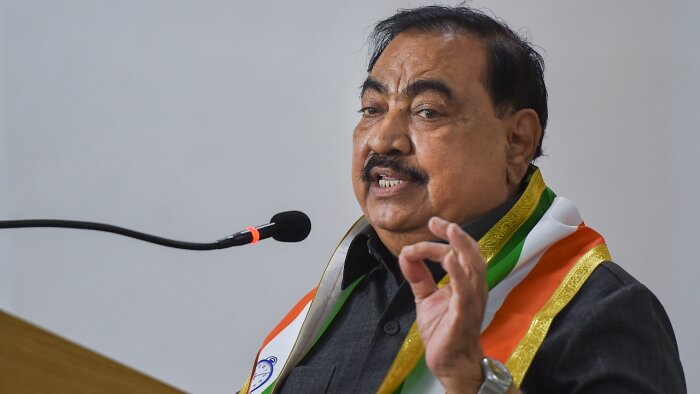 He was produced before a special court here, which tries cases registered under the Prevention of Money Laundering Act (PMLA), and was sent to the ED custody till July 12.

Official sources said Khadse has been issued fresh summons to appear before the investigating officer of the case on Thursday and it is understood that the agency wants to confront him with his son-in-law.

The federal probe agency said Chaudhari was arrested in the wee hours after being questioned at length in the case since Tuesday at the office of the central investigative agency in south Mumbai.

Officials alleged that Chaudhari was not cooperative during the questioning and hence was placed under arrest so that he can be put under custodial interrogation.

The ED case stems from a Pune police anti-corruption bureau (ACB) FIR filed against Khadse, his wife Mandakini and Chaudhari in April, 2017.

The agency claimed that alleged irregularities in the land deal caused a loss of Rs 61.25 crore to the exchequer "by fraudulently entering into a sale deed".

The plot, owned by state-run MIDC, under the scanner is located in the Haveli Taluka of Bhosari, a suburb of Pune district and it bears the survey no 52/2A/2.

Khadse was questioned in the case by the ED for about six hours in January this year and his statement was recorded.

The agency issued a statement to describe the alleged role of Chaudhari in the deal, saying "with the connivance of others, he knowingly entered into a sale deed to acquire the said land despite the land belonging to the Maharashtra Industrial Development Corporation (MIDC) to avail a compensation more than 2.5-3 times of the actual value of land".

"The land was registered at a much lower rate of only Rs 3.75 crore against the prevailing value of Rs 31 crore," it claimed.

Probe found that the accused "claimed the source of fund to purchase the said property as loan from some companies".

"However, it is revealed that these funds were layered and routed through shell companies, which are either dysfunctional or struck off (from the government record books) later on," it alleged.

Khadse, the then state revenue minister, had resigned from the former chief minister Devendra Fadnavis-led Maharashtra cabinet in 2016 after facing allegations regarding the same land deal and some other issues.

It was alleged that he misused his official powers to facilitate this deal.

Khadse denied any wrongdoing, saying that the state police ACB as well as the Income Tax Department had given him a clean chit in the matter.

The case dates back to May 2016, when Pune-based businessman Hemant Gawande filed a complaint with the Bund Garden police station in the city.

The businessman had alleged that Khadse misused his power as a minister and purchased a land plot owned by the MIDC in Bhosari area in the name of his relatives at Rs 3.75 crore against a market price of Rs 40 crore.

Based on the complaint, the Pune ACB later registered an FIR against the three Khadse family members and the original landowner, Abbas Ukkani, under various sections of the Prevention of Corruption Act and section 109 of the Indian Penal Code (IPC).

The ACB, in April 2018, submitted a 22-page report before a Pune court after completion of investigation.