The Union Environment Ministry said there was no factual evidence that animals can transmit the disease to humans any further. 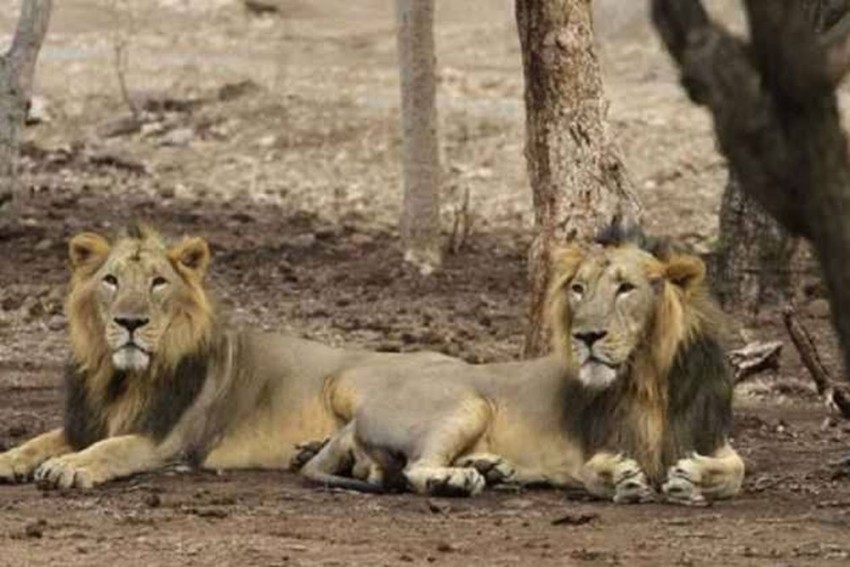 Rakesh Mishra, advisor, CSIR-Centre for Cellular and Molecular Biology on Tuesday said that eight Asiatic lions in the zoo in Hyderabad have tested positive for COVID-19 after their saliva samples were thoroughly examined.

The infection was not caused by any variant of concern, adding all the eight lions, since isolated, have responded well to the treatment and were recovering, said the Union Environment Ministry.

Further, there was no factual evidence that animals can transmit the disease to humans any further, it said.

"The saliva samples of the Asiatic lions were thoroughly tested and they turned out to be positive. As they were living closely it must have been spread among them," Mishra told P T I.

"Now we are developing a method to test the samples of their faeces. This method would be useful in future as every time it is not possible to collect saliva samples from wild animals," he added.

He further said the virus which is present in the lions at the Nehru Zoological Park here is not any new variant.

Replying to a query, he said there is every possibility of animals contracting the virus as they are also mammals like human beings.

Mishra further said these animals must have got infected through zoo-keeping staff.

A senior official of the zoo said they keep sending the samples of the animals to CCMB from time to time for analysis.

As the lions started showing symptoms such as fever, the zoo officials collected the samples and sent them to CCMB.

The official further said the samples from the wild animals will be collected either by 'Squeeze cage' method or by tranquilising them.

In the 'squeeze cage' method, the animal will be confined in a cage without any space so that it cannot move or resist while taking samples.

Meanwhile the Ministry of Environment, Forest and Climate Change that the infected animals were behaving normally.

Based on detailed diagnostic tests and report as shared by CCMB-LaCONES (Laboratory for Conservation of Endangered Species) on May 4, it has been confirmed that the eight Asiatic lions housed in NZP have tested positive for SARS-CoV2 virus, it said.

"They are behaving normally and eating well. Preventive measures are already in place for all zoo staff and the zoo has been closed to visitors to avoid minimal external contact," it said in a release.

In view of rapid spread of the coronavirus in the country, the Ministry recently issued an advisory to close all zoological parks, national parks, tiger reserves and wildlife sanctuaries for visitors till further orders to control the spread of the pandemic.

Accordingly, the zoo here, Kakatiya Zoological Park, Warangal, Kawal and Amrabad Tiger Reserves, all National Parks and wildlife sanctuaries in Telangana were closed from May 2.

"As part of next steps new guidelines for COVID precautions are being further developed in consultation with experts. Additional information shall be issued as warranted," the release said.

Based on experience with zoo animals elsewhere in the world that tested positive for the virus last year, "there is no factual evidence that animals can transmit the disease to humans any further," it said.

According to published reports earlier, lions and tigers had tested positive for Covid-19 in zoos in Barcelona (Spain) and Bronx in the US.