The channel, also called 'Content TV', carries the picture of Prime Minister Narendra Modi as its logo. It is available on various DTH and cable TV platforms. It shows speeches of the PM and interviews of BJP leaders. 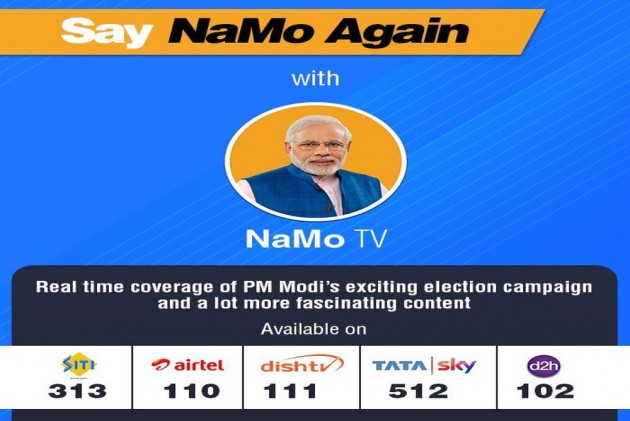 The channel, also called 'Content TV', carries the picture of Prime Minister Narendra Modi as its logo. It was launched ahead of  Lok Sabha polls beginning April 11. It is available on various DTH and cable TV platforms.  It shows speeches of the PM and interviews of BJP leaders.

The AAP had recently written to the EC complaining against Namo TV, asking the poll panel if political parties having TV channels was in adherence to the model code of conduct.

What Is Model Code Of Conduct? Did PM Modi Violate It By Announcing A-SAT?

The Arvind Kejriwal-led party asked the EC if the BJP had sought approval for the launch of the channel. "Can permission be granted to a party to have its own TV channel even after the model code is enforced? If no permission was given by the ECI, then what action has been taken?," the AAP said in its letter to the poll panel.

It had also asked if the Bharatiya Janata Party had approached the Media Certification Committee, established to certify content and cost of a telecast.

The Congress had also moved the poll panel over the channel, saying it was violative of the poll code and the Representation of the People Act.

The EC has also learnt to have written separately to Dordarshan for telecasting live the 'Main bhi chowkidar' programme of Modi on March 31 evening for one hour.

The Congress had written to EC against the BJP's alleged "misuse" of Doordarshan in broadcasting certain speeches by Prime Minister Modi.

The Congress has called for a level playing field for all parties in election campaigning.

The 'Main Bhi Chowkidar' programme of the prime minister was being broadcast live on DD News and its YouTube channel, and the said programme was even being promoted on social media handles of DD News, the Congress memorandum said.