Assembly elections in West Bengal will be held in 2021. But the BJP may not wait till then;their immediate goal is to put an end to Mamata’s rule as soon as possible. 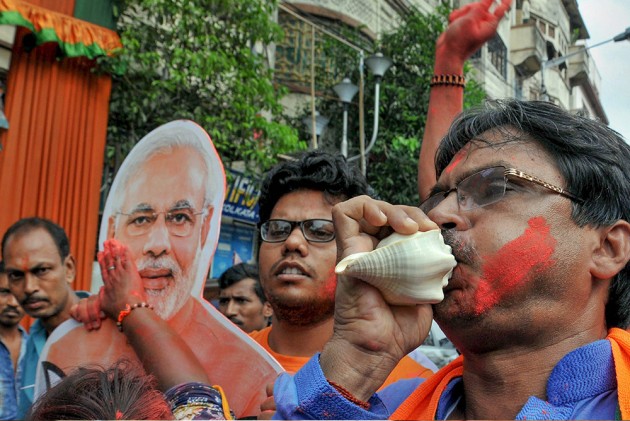 It’s a re-run of 2009 in West Bengal, but with a slight difference. The BJP’s spectacular electoral victory, 18 seats out of total 42, has made history as it not only fought and snatched 16 seats from the ruling Trinamool Congress (TMC), it also signalled the complete decimation of the liberal-secular politics represented by the Left and the Congress.

In the last few rounds of election, a slogan “2019 me half, ‘21 saal me saaf" coined by the state BJP president Dilip Ghosh, was made popular in rural part of south Bengal. After grabbing almost half of the Lok Sabha seats in Bengal, Ghosh declares that now their target is to dislodge Mamata Banerjee from power as soon as possible.

In 2009, in the aftermath of violent anti-Left peasant movements in Singur-Nandigram, the TMC wrested 19 seats in Lok Sabha. From then onwards, there was no stopping the TMC from defeating the Left and capturing power in West Bengal. But, for that to happen, they had to wait till 2011 state assembly election.

Here, the difference with 2009 is that the BJP is in a hurry. They might not wait till 2021. Early warnings were issued by PM Narendra Modi and BJP president Amit Shah during the campaign time in the state. Now, BJP’s Dilip Ghosh reiterates that their immediate goal is to put an end to Mamata’s rule as soon as possible. Jayprakash Majumdar, BJP state vice president, thinks that there is a marked difference between the Left and the TMC. Because of their ideological moorings, in 2009, the Left leaders and workers were not thought to be vulnerable to allurement for deserting their party. So, the TMC had to wait till 2011 assembly election. “But, the TMC leaders have no ideology or principles upon which they base their political activities. The only thing that kept them together is the glue of power. So, when they see that power is changing hands, they will desert their party and flock to our party,” observes Majumdar.

The result came as a huge shock and disappointment to Mamata and her party leaders. After having paid in advance for huge quantity of colour, sweets and fire crackers, they were ready for their victory celebrations. They were totally unprepared for the adverse result that hit them hard. Now, the ruling TMC will be busy defending itself against the waves of attacks that would be launched by the BJP here. With the wind of change blowing across the state, the next two years the TMC government will face difficulties in implementing whatever policies they initiate. So far, the police and bureaucrats were giving Mamata government all kind of support. Now, they will steadily switch over their allegiance and covertly support the BJP. As a result of that, the state administration will almost work as an insurmountable obstacle to the TMC government and party. Once the police move away from the ruling party, the TMC’s possible resistance to BJP’s will crumble down to meek surrender.

(Rajat Roy is a senior journalist.)