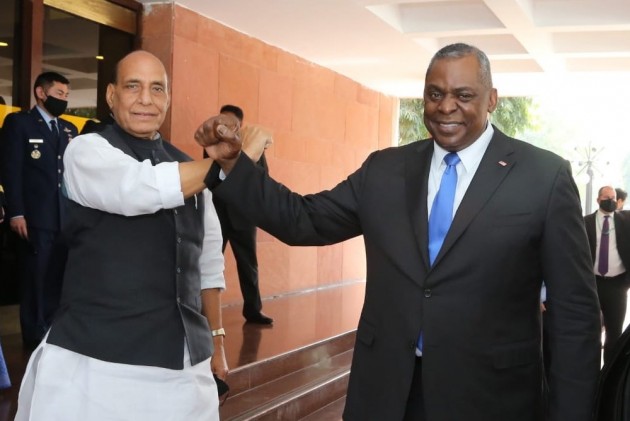 US Defence Secretary Lloyd Austin on Saturday Said that elevating the US-India defence partnership is a priority of the Biden administration as he described the relationship between the two countries as a "stronghold" of a free and open Indo-Pacific.

Austin held wide-ranging talks with Defence Minister Rajnath Singh and said India is an increasingly important partner amid rapidly shifting international dynamics and Washington was committed to a "forward-looking" defence partnership with New Delhi as a central pillar of its approach to the region.

Austin arrived here on Friday on a three-day visit as part of his three-nation first overseas tour that signalled the Biden administration's strong commitment to its relations with its close allies and partners in the Indo-Pacific region. He visited Japan and South Korea before India.

"I reaffirmed our commitment to a comprehensive and forward-looking defence partnership with India as a central pillar of our approach to the region," he said in a media statement in presence of Singh

"As the world faces a global pandemic and growing challenges to an open and stable international system, the US-India relationship is a stronghold of a free and open Indo-Pacific region," he said.

The US Defence Secretary said as the Indo-Pacific region faces challenges to a free and open regional order, cooperation among like-minded countries is imperative to securing the shared vision for the future.

"In addition, we are continuing to advance new areas of collaboration, including information-sharing, logistics cooperation, artificial intelligence; and cooperation in new domains such as space and cyber," he added.

Austin also described his talks with Singh as "productive" discussion on a number of security issues which are important to the two countries.

"As the Indo-Pacific region faces acute transnational challenges, such as climate change, and challenges to a free and open regional order, cooperation among like-minded countries is imperative to securing our shared vision for the future," he said.

"Despite today's challenging security environment, the partnership between the US and India, the world's two largest democracies, remains resilient and strong and we will seek every opportunity to build upon this major partnership," he added.

About his visit, Austin said he wanted to convey the Biden administration's message of the US's strong commitment to its allies and partners.

"India, in particular, is an increasingly important partner amid today's rapidly shifting international dynamics," he added.

In his statement, Austin also referred to Prime Minister Narendra Modi's comments that India stands for "freedom of navigation and overflight, unimpeded lawful commerce, and adherence to international law."

"This is a resounding affirmation of our shared vision for regional security in the Indo-Pacific. And it's clear that the importance of this partnership, and its impact to the international rules-based order will only grow in the years ahead," he said.

He said there was a discussion on engagement with like-minded partners through multilateral groupings such as the Quad and ASEAN. The 10-nation ASEAN (Association of Southeast Asian Nations) is a key stakeholder in the Indo-Pacific region.

"I am confident that, together, we can build a partnership fit for today's and tomorrow's challenges," Austin said.

"Great meeting with National Security Advisor Doval last night. The breadth of collaboration between our two nations reflects the significance of our Major Defense Partnership as we work together to address the most pressing challenges facing the Indo-Pacific region," he tweeted.