Anand Teltumbde is the grandson-in-law of Dalit icon Dr B R Ambedkar, whose 129th birth anniversary is being observed today 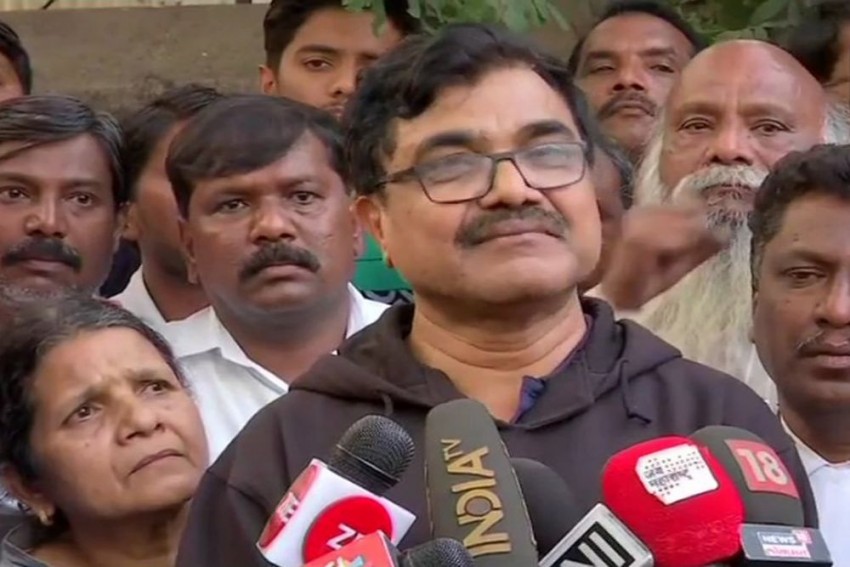 Dalit scholar Anand Teltumbde along with activist Gautam Navlakha surrendered before the National Investigation Agency (NIA) on Tuesday in connection with the Elgar Parishad-Maoist links case.

Anand Teltumbde is the grandson-in-law of Dalit icon Dr B R Ambedkar, whose 129th birth anniversary is being observed on Tuesday.

Teltumbde arrived at the NIA office at Cumbala Hill in south Mumbai along with his wife Rama Teltumbde and brother-in-law and Dalit leader Prakash Ambedkar.

Navlakha surrendered in New Delhi after the Supreme Court had refused to extend his plea in the wake of the COVID-19 pandemic.

The Supreme Court on March 17 this year rejected the pre-arrest bail pleas of Teltumbde and co-accused and civil rights activist Gautam Navlakha, and directed them to surrender before the investigating agency.

"Keeping with the Supreme Court's directive, Anand Teltumbde appeared before the NIA to surrender," his lawyer Mihir Desai said.

The academician will be placed under arrest and produced before a sessions court by evening, an official said.

Civil rights activist Gautam Navlakha surrendered before the National Investigation Agency (NIA) on Tuesday here after the Supreme Court had refused to extend his plea in the wake of the COVID-19 pandemic, officials said.

Navlakha, who has been accused under the stringent Unlawful Activities Prevention Act for alleged involvement in the Bhima Koregaon riots in 2018, was asked to surrender by the Supreme Court.

Editor of Mumbai-based Economic and Political Weekly journal for years, Navlakha was one of the five human rights activists arrested for alleged Maoist links and involvement in the Bhima Koregaon violence on January 1, 2018 but was granted protection from the arrest by the Supreme Court and the Bombay High Court.

A day before his arrest, Teltumbde wrote an open letter saying, "Taking shelter under the draconian provisions of the UAPA, that renders a person defenseless, I am being jailed."

He added that what happened to him could happen to "anyone". "As I see my India being ruined, it is with a feeble hope that I write to you at such a grim moment. Well, I am off to NIA custody and do not know when I shall be able to talk to you again. However, I earnestly hope that you will speak out before your turn comes,” he wrote.

Teltumbde and other activists were initially booked by the Pune Police following violence that erupted at Koregaon-Bhima there.

According to police, the activists made inflammatory speeches and provocative statements at the Elgar Parishad meet held in Pune on December 31, 2017, which triggered violence the next day.

The police also said these activists were active members of banned Maoist groups.

The case was later transferred to the NIA.

Teltumbde and Navlakha were given interim protection by the Bombay High Court while their pre-arrest bail pleas were being heard.

After the high court rejected their applications, the duo approached the Supreme Court.

On March 17, the apex court rejected their pleas and directed them to surrender within three weeks.

On April 9, the Supreme Court granted the duo another week to surrender by way of last chance.