BJP rallies in West Bengal are witnessing a poor turnout at a time when BJP is also struggling to contain internal dissent over the distribution of tickets. 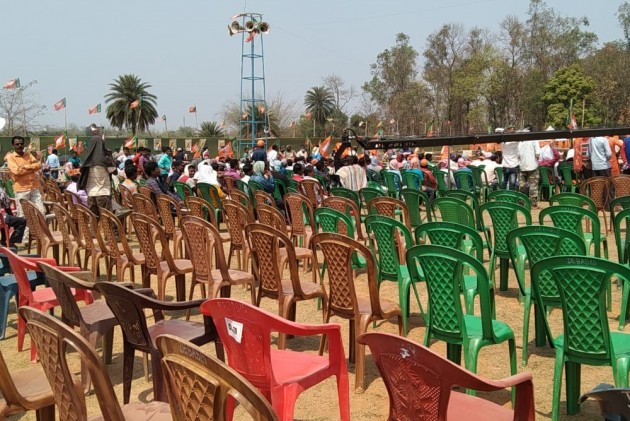 Empty chairs have, indeed, turned into a talk of the town in poll-bound West Bengal, with political observers asking if the BJP, which hopes to topple the Mamata Banerjee regime, has lost the momentum it was enjoying.

Photos of empty chairs at the venue went viral on social media as the supporters of Trinamool Congress (TMC) and Left parties, shared them on social media, citing them as tell-tale evidence of the BJP’s prospects. These were also reported in the Bengali media, both print, electronic and digital.

In Jhargram district, even Union home minister Amit Shah’s rally witnessed a very poor turnout. Shah did not arrive at the venue and the party cited a technical snag in his helicopter as Shah gave a virtual speech. The TMC, nevertheless, was quick to question if empty chairs had a connection with the technical snag in Shah’s chopper.

So, has the BJP lost the momentum? The question is growing louder, BJP rallies are witnessing a poor turnout at a time when BJP is also struggling to contain internal dissent over the distribution of tickets. BJP workers staged protests in different districts against the national leadership’s choice of candidates, especially involving those who came from other parties, and even party offices have been vandalised by their own workers.

Senior BJP leaders do not agree. “Grievances among a section of the workers and the way they protested is unwelcome in a disciplined party as ours is. However, the grievances also reflect people’s enthusiasm over getting a BJP ticket, as everyone believes the party is coming to power this time,” said a senior leader of the party’s Bengal unit who did not want to be named.

The BJP's Bengal youth wing chief Saumitra Khan, who is also a Lok Sabha MP, said the TMC was terrorising people in many areas and using threats to stop people from attending BJP's rallies. He cited his own example of how he won in 2019 despite being barred from campaigning in majority of his constituency, Bishnupur.

According to political analyst Biswanath Chakraborty, a professor of political science at Rabindra Bharati University in Kolkata, "In West Bengal, turnout in rallies does not necessarily reflect the prospect of a party or the mood of the people."

Of course, there are several examples that show poor performance of a party despite organising successful rallies with massive turnouts. On the other hand, in the 2019 Lok Sabha elections, the BJP had taken lead in some booths where the party did not even have an agent.

Nevertheless, a senior state unit leader of the BJP said that the party was, indeed, losing out on the momentum due to the complexities and uncertainties over choosing the candidates.

"A section of the leaders in the districts are not giving their all," said a BJP state committee member.