'I want to tell through you (media) that farmers should leave the path of protest and come for dialogue. We are ready for talks if they come with issues in the bills,' Narendra Singh Tomar said 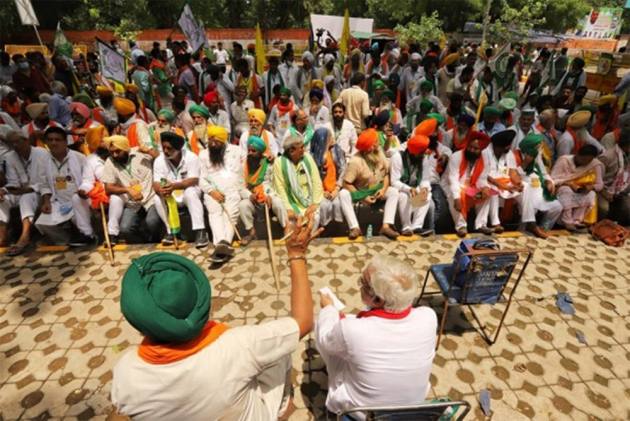 Hours after a group of farmers reached Jantar Mantar in New Delhi to protest against the three new farm laws, Union Agriculture Minister Narendra Singh Tomar has urged them to leave the path of agitation and come for talks. He said, "I want to tell through you (media) that farmers should leave the path of protest and come for dialogue. We are ready for talks if they come with issues in the bills."

Tomar said farmers across the country have favoured the three farm laws.

After getting special permission from Delhi Lt Governor Anil Baijal, a group of 200 farmers reached Jantar Mantar -- adjacent to the Parliament Complex -- in central Delhi to protest against the Centre's three contentious farm laws amid the ongoing Monsoon session of Parliament.

‘It’s An Unethical Govt, We Suspect They Snooped On Us Too’: Protesting Farmer Leaders

They have got permission to protest till August 9 amid heavy security.

"...If they come with their proposal, we are ready to discuss," he told reporters.

Asserting that the government is sensitive towards farmers, the minister said in the last seven years under the leadership of Prime Minister Narendra Modi, major steps have been taken in the agriculture sector, the benefits of which are reaching cultivators across the country.

"The three farm bills are also a step in this direction. Farmers across the country have favoured the bills," he asserted.

Tomar, in a written reply in the Lok Sabha on Wednesday, had reiterated that the government will remain open to discussions with protesting farmers' unions to resolve issues over the three agriculture laws passed by Parliament in September last year.

"The government has been engaged in serious, sensitive and active discussions with the farmers' unions to resolve the issues. During various rounds of discussions, the government continuously requested the farmers' unions to discuss the provisions of the farm laws, so that if there is an objection to any provision, the advancement can be made towards resolution of those," the minister had said.

But the farmers' unions insisted only on the repeal of the farm laws, he added.

Thousands of farmers, mainly from Punjab, Haryana and western Uttar Pradesh, have been camping at Delhi's borders for over seven months now in protest against the three laws.

The government and unions have held 11 rounds of talks, the last being on January 22, to break the deadlock. Talks have not resumed following widespread violence during a tractor rally by protesting farmers on January 26.

The Supreme Court has put on hold the implementation of the three laws till further orders and set up a committee to find solutions. The committee has already submitted its report.