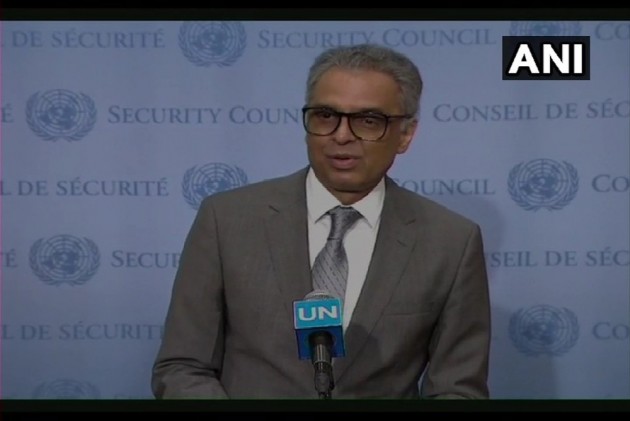 India on Friday said the revoking of Jammu and Kashmir's special status was "entirely an internal matter" with "no external ramifications" and firmly told Pakistan that it has to stop terrorism to start talks, as the UN Security Council held a rare closed door meeting on the Kashmir issue.

After making a statement, Akbaruddin took questions from the reporters gathered at the UN Security Council stakeout. China and Pakistan's envoys left immediately after making their remarks and without taking any questions.

Without naming Pakistan, he said there are some who are trying to project an "alarmist approach" to the situation in Kashmir, which is far from the ground realities.

Akbaruddin asserted that there are normal diplomatic ways when countries deal with each other. "That is the way to do it. But using terror to thrive and push your goals is not the way that normal states behave. No democracy will acknowledge or accept talks when terror thrives. Stop terror, start talks."

He said that India's national position was and remains that matters related to Article 370 of the Indian Constitution are "entirely an internal matter of India.

"These have no external ramifications. The recent decisions taken by the Government of India and our legislative bodies are intended to ensure that good governance is promoted, socio-economic development is enhanced for our people in Jammu and Kashmir and Ladakh," he said, adding that authorities in Jammu and Kashmir have announced a whole set of measures that the government is undertaking to move towards normalcy.

"We are are gratified that the Security Council in its closed consultations appreciated these efforts, acknowledged them," he said referring to the the UNSC meeting that lasted over an hour.

Diplomatic sources said the meeting ended with no outcome.

On the measures taken by the Indian government following the revocation of Article 370, he said "Prevention is better than cure. The measures that we took were preventive in nature. They were designed to stop terrorists from bleeding our people. In the 10 days that have passed, there are no casualties, no fatalities."

On the Chinese and Pakistani envoys' remarks after the UNSC meeting, he said, "I'm a much more conventional diplomat. I do my job rather than add to the fire and fury of heightening tensions. For the first time after the end of Security Council consultations, we noted that two states who made national statements tried to pass them off as the will of the international community. National statements (trying) to masquerade as the will of the international community."

He said India is committed to gradually removing all restrictions in Kashmir.

"Of particular concern is that one state is using terminology of jihad and promoting violence in India, including by their leaders. Violence is no solution to the problems that all of us face," he said, taking a swipe at Pakistan.

"We are sad that terrorism is being fuelled, language and incendiary talk of jihad is being mentioned by people who should know better," he said, adding that India stands ready to continue its efforts towards peaceful resolution of all issues in an "atmosphere free of terror and violence."

When asked about human rights violations in Kashmir, Akbaruddin said "if there are issues, they will be addressed by our courts. We don't need international busy bodies to try and tell us how to run our lives. We are a billion plus people. We have a commitment to democracy unlike those who are now trying to speak to me, whose experience is extremely limited. We have vast experience, we will fulfil our goals."

Earlier, briefing the media, Pakistan's ambassador to the UN, Maleeha Lodhi said the very fact the UNSC meeting had taken place is "testimony to the fact that this is an internationally recognised dispute".

After the UNSC meeting, Chinese Ambassador to the UN Zhang Jun urged India and Pakistan to settle their differences peacefully and "discard the zero-sum game mentality".

"We call upon relevant parties to exercise peace and not to take actions that will aggravate tensions," he said.

Voicing China's stand on India revoking the special status of Kashmir, he said "the unilateral action by India has changed the status quo in Kashmir, which is an internationally recognised dispute."

Voicing Beijing's opposition to India forming a separate Union Territory of Ladakh after revocation of the special status of Kashmir, he said: "India's actions have also challenged China's sovereign interests and violated bilateral agreements in maintaining peace and stability in the border areas, and China is very much concerned."

"I want to emphasise that such unilateral practice by India is not valid in relation to China, and will not change China's exercise of sovereignty and effective administrative jurisdiction over the territory," he said.

According to UN records, the last time the UN Security Council discussed the the Kashmir issue was in 1965.