Mehbooba said the Centre should initiate confidence building measures and allow 'people to breathe' and also ensure protection of jobs and land for the people. 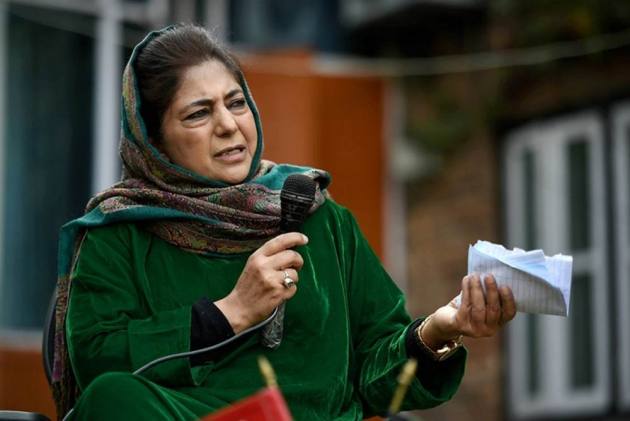 The dialogue process initiated by Prime Minister Narendra Modi with Jammu and Kashmir's mainstream leadership can gain credibility by ending an "era of oppression and suppression" in the union territory and understanding that a dissenting voice is not a criminal act, PDP chief Mehbooba Mufti said.

Mehbooba, who was part of the delegation, made it clear that the onus was on the Centre to make the dialogue process credible, and said it should initiate confidence building measures and allow "people to breathe" and also ensure protection of jobs and land for the people.

"Give the people right to breathe and rest will follow later," the former chief minister said, as she termed the prime minister's meeting with a 14-member delegation from J and K here on Thursday as a way forward to end the "sufferings" of people in the erstwhile state now under central rule.

"When I say allow people to breathe, I mean that today any dissenting note from any side has to cool his or her heels in the prison. Recently, a man was jailed for expressing his sentiments that he had lots of hope from a Kashmiri advisor. The concerned Deputy Commissioner ensured that he was in jail for a few days despite being granted bail by the court," Mehbooba said.

So, when the prime minister says that he wants to eradicate 'Dil ki doori', such kind of suppression has to come to an end immediately, she added. At the landmark meeting, Prime Minister Modi had said he wants to remove "Dilli ki doori" (distance from Delhi) as well as "Dil ki doori" (distance between hearts) in an effort to bring Delhi closer to the people of Jammu and Kashmir.

"Dil ki doori has to be decreased with the people of Jammu and Kashmir and for that all the draconian orders passed have to stop. The jobs and land rights have to be protected," the PDP president said.

"First and foremost, the era of suppression and oppression has to come to an end and the government has to understand that a dissenting voice is not a criminal act. The entire state of Jammu and Kashmir, and I will refer to it only as a state, has become a jail," she said.

The 62-year-old Mehbooba, who was the last chief minister of the erstwhile state of Jammu and Kashmir before abrogation of its special status on August 5, 2019, emphasised that among other measures required as confidence building measures were providing relief to the tourism and trading community of Jammu, Kashmir and Ladakh regions.

On August 5, 2019, mainstream politicians including Mehbooba, Farooq Abdullah, his son Omar and others were taken under preventive detention. The senior Abdullah was the first to be slapped with the controversial Public Safety Act(PSA), followed by Omar and Mehbooba.  The PSA against Abdullah senior was revoked in March last year and in the same month Omar was also set free. However, Mehbooba was released only in October last year.

Maintaining that she took part in the Delhi talks only to apprise the central leadership of problems faced by the people, Mehbooba said, "I have not come for any power politics as my stand is clear that I will not contest any elections until the special status of Jammu and Kashmir is restored."

"Since the invite was from the prime minister, I took it as an opportunity to highlight the suffering of people post August 5, 2019 when Article 370 was scrapped and bifurcation of state was done unconstitutionally". Article 370 of the Constitution gave special status to J and K.  On August 5, 2019, the border state was bifurcated into union territories of Jammu and Kashmir and Ladakh.

Mehbooba also reiterated that she would not contest elections if J and K remained a union territory.

"I have made it clear many times that I would not contest any elections under the Union Territory, but at the same time my party is also aware of the fact that we will not yield political space to anyone. We contested the District Development Council elections held last year," she said.

"Similarly, if elections are announced for the assembly, the party would sit and discuss."

The 14-member delegation not only met the prime minister, but also Union Home Minister Amit Shah and senior bureaucrats.  Besides Mehbooba, the other former chief ministers who were part of the delegation were Farooq Abdullah, Ghulam Nabi Azad and Omar Abdullah.