During the induction event held at NCPs head office, both Sharad Pawar and Khadse maintained the switch over was not driven by any expectation from either side. 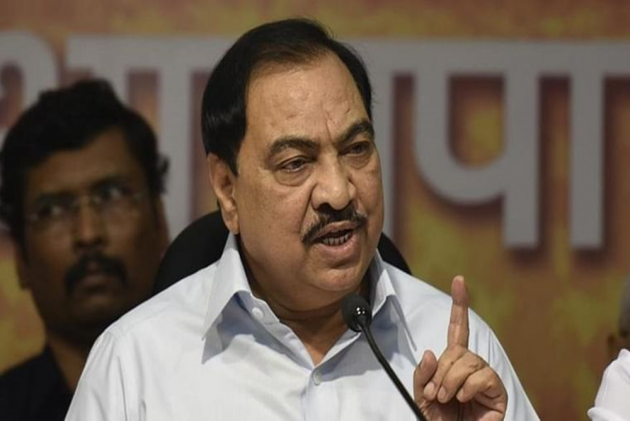 Former Maharashtra BJP leader Eknath Khadse, his daughter Rohini and a bunch of supporters joined the NCP on Friday, vowing to expand the party's base with double the speed with which he had worked for the saffron outfit where he had a long political stint.

Khadse, who joined the NCP in the presence of party patriarch Sharad Pawar and a battery of its senior leaders, was his combative self and said he would play CD if ED is unleashed after him following his desertion of the BJP.

Khadse also claimed that some seniors in the BJP itself had told him that he had no future in his erstwhile party and that he should join the NCP, which is a key ally in the Shiv Sena-led Maha Vikas Aghadi (MVA) government.

During the induction event held at NCPs head office, both Pawar and Khadse maintained the switch over was not driven by any expectation from either side.

Pawar said everything will be as it is and refuted media reports that claimed that Deputy Chief Minister and his nephew Ajit Pawar's absence from the event showed the latter was unhappy over Khadses induction into the party.

Khadse, a former state cabinet minister who enjoys influence in Jalgaon district in the Khandesh region, quit the BJP on Wednesday.

The 68-year-old politician from north Maharashtra, while announcing his resignation from the BJP, had accused former Chief Minister Devendra Fadnavis of "destroying" his political career.

Speaking at the NCP event, Khadse reiterated injustice was meted to him in the BJP and that he was fleeced, insulted, and defamed and a false charge like molestation, too, was leveled against him.

Khadse, a prominent OBC leader, had to resign from the Fadnavis government in 2016 overland grab allegations which he had refused.

I had in the House demanded papers (of evidence) if there was any wrongdoing on my part. If there was anything else, tell that in the Assembly.

"But to date, there has been no answer to my question, he said.

I am not enfeebled. Once, while holding discussions with Jayantrao (Patil), he asked me whether I am joining the NCP? I said yes, I want to.

"If you (Patil) are going to help me, I will come.

Jayantrao told me that the ED will be after me (if I joined the NCP). I said if they will unleash ED behind me, I will play CD, Khadse said cryptically, without divulging details.

Which land did I grab? Jayantrao let some days go. I will show you who usurped how many lands," Khadse said.

Khadse said he joined the NCP without any expectation of any post or role and added he will work to expand the party’s base.

I will work to expand NCP with double the speed that we expanded the BJP...I am not afraid of anyone if there is support from behind, he added.

The former Maharashtra minister further said it was the sentiment of his supporters to join the NCP and claimed some of his seniors from Delhi in the BJP, too, suggested to him so.

When I discussed the situation with seniors in Delhi, they said Natha Bhau (Khadse) you don't have a future here (in the BJP).

"I asked what I should do? They asked me to change the party. I asked which one should I join? Then they suggested the NCP, he claimed.

Khadse claimed several leaders in the BJP are fed up and think they should jump the ship but cannot do so as they are apprehensive the ED will be after them.

Dismissing media reports that Ajit Pawar -- who has tested negative for COVID-19, but is in-home quarantine – is unhappy over the development, Sharad Pawar asked, why would he be unhappy?

The former Union minister said he has asked everyone to take care of health during the COVID-19 pandemic.

He (Khadse) said that he is ready to work hard for the common people without any expectations. He did not tell me anything beyond this during our discussion, Pawar said.

Pawar also trashed media reports claiming some NCP minister in the MVA government will relinquish his post to pave the way for Khadses induction into the cabinet. Nothing of that sort (will happen). There will be no change. Everything will be as it is, he added.