The Governor of Meghalaya has a habit of making bizarre public pronouncements about his time as Governor of J&K, two years after he was relocated. 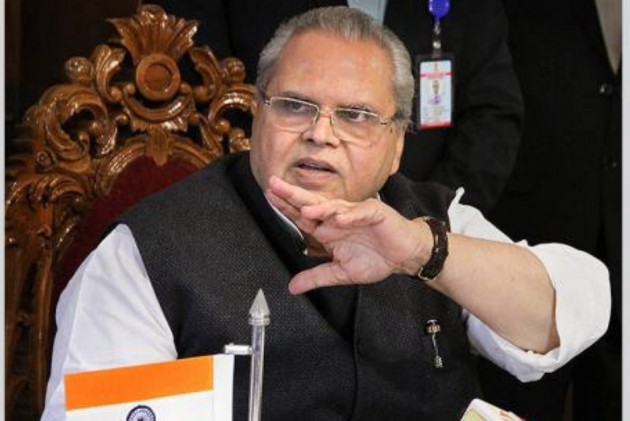 Satya Pal Malik, former Governor of Jammu and Kashmir, is back in the headlines, with his revelations about the Kashmir Valley. Since his removal as J&K Governor in 2019, he often comes up with statements that begin with “Jab mai wahan [Kashmir] thha…” (When I was there in Kashmir..)

This time, it’s about shady land deals. “Two files came before me in J&K. One of them pertained to Ambani, the other to a senior RSS functionary. One of the secretaries told me: “These are shady deals, but you can get Rs 150 crore each from these”. I rejected the offer saying I’d arrived [in Kashmir[ with five kurtas, and will leave with just these.” He added that across the country, the rate of commission for clearing such files is 4-5 per cent, but in Kashmir, it was 15 per cent.
Interestingly, he said nothing about whether he had taken any (mandatory) punitive action against the secretary, or not. It is another matter that in J&K, no secretary-level officer has been dismissed so far.

People in the Valley know him well. Ahead of revocation of Article 370, Malik had described apprehensions about its removal as mere rumours. But when Article 370 was abrogated, he took credit for that too, amid unprecedented military siege, arrests of thousands of people and communication blackout.

In 2019, when former chief minister Mehbooba Mufti faxed him her letter, staking claim to form the government, he infamously said his fax machine was not working. In July 2019, he referred to militants as boys and urged them to kill corrupt politicians. “These boys who have picked up guns are killing their own people, they are killing PSOs (personal security officers) and SPOs (special police officers). Why are you killing them? Kill those who have looted the wealth of Kashmir. Have you killed any of them?” Malik had asked. To this, National Conference leader Omar Abdullah had said: “Save this tweet - after today any mainstream politician or serving/retired bureaucrat killed in J&K has been murdered on the express orders of the Governor of J&K Satyapal Malik.” Abdullah had gone on to say that Malik should check his own reputation in Delhi before sanctioning unlawful killings.

Few remember all these details from a region where too many unsavoury events happen in quick succession, and where forgetfulness is a blessing as it helps one to move on. But Satya Pal Malik keeps surfacing at different places—sometimes in Goa, sometimes Meghalaya, sometimes Rajasthan—to remind Kashmiris what he did “for them”.

Two years ago, in October 2019, Malik was moved out of J&K and appointed Governor of Goa. He wanted to be Lt Governor of Jammu and Kashmir but the government took no chance. But only a month after taking charge in Goa, in November 2019, he said he still suffered from a Kashmir “hangover”. He quoted from Pakeezah: “Aaj ki raat bachenge to sehar dekhenge” and said the line was relevant for him when he was in Kashmir.

Later, in a speech in March 2020 in Goa, he said he had got a call from the then chief secretary, just a day before Article 370 was abrogated, who had apparently told him that more than 1,000 people could get killed once the state was stripped of its special status. “I was told 1,000 people will get killed (after the abrogation of Article 370),” Malik said, adding that he was told even the police could revolt. He went on to say that this wouldn’t happen as he had already cleared J&K Police their allowances.

In August 2020, when Malik was transferred to Meghalaya as Governor, Abdullah took a dig at him, tweeting: “Meghalaya kahan hai?”, indicating Malik would soon be forgotten in far off Meghalaya.

Malik had earlier said Farooq Abdullah and Mehbooba Mufti were beneficiaries of the state’s Roshni Scheme, under which government land in illegal? possession of people was regularised. One wonders why he didn’t have the Abdullahs and Muftis detained on charges of corruption, though. He had the opportunity on August 5, 2019, when Article 370 was removed and they were arrested, but the charge sheet against Abdullah was strange. It accused him of being a potential threat, as he had the power to convince voters.

In the case of Mufti, the charges were bizarre: “The subject (Mufti) is referred for her dangerous and insidious machinations and usurping profile and nature by the masses as ‘Daddy’s girl’”.