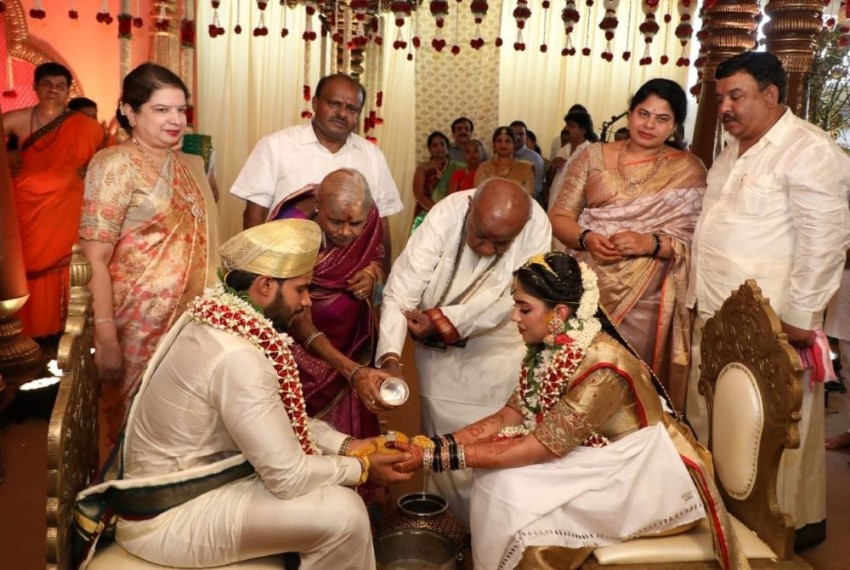 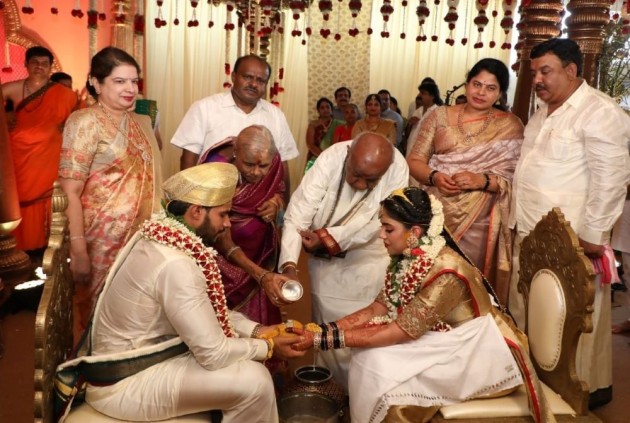 Amid the coronavirus lockdown across the country when public gatherings and events have been stopped to maintain social distancing, former Karnataka CM HD Kumaraswamy's son's wedding on Friday emerged as an exception.

Photos of the wedding near Bidadi in Ramanagara district where Nikhil Kumarswamy tied the knot with Revathi, the grand-niece of former Congress Minister for Housing M Krishnappa, showed no social distancing or usage of masks.

"As scheduled, the wedding was held at the auspicious time (10-11 a.m.) in the farmhouse at Kethaganahalli near Bidadi in the presence of family members and close relatives," Kumaraswamy's media secretary K.C. Sadananda told IANS, adding that around 100 people were present at the ceremony.

HD Kumaraswamy had earlier said that in view of the lockdown, the marriage was planned at their home in Bengaluru itself but since social distancing will be a challenge, it was decided to be held at Ramanagara.

But after the wedding photos emerged, the caution preached by the former CM wasn't seen in implementation as relatives huddled up to partake in the rituals.

The media was not allowed to enter the Ramanagara district while around 30-40 cars were seen heading towards the location from Bengaluru, India Today reported.

The wedding saw a comparatively low-key ceremony with the family forced to shelve grand plans in view of the COVID-19 lockdown. Only close family members will attend the marriage to be held at a farmhouse in nearby Ramanagara district, the JD-S leader had said.

With congregation of any type not allowed during the lockdown to check coronavirus spread, Kumaraswamy had explained in a video message that the event will be a low-key affair of two
families with a minimum number of people.

"It is difficult to maintain social distancing if the event is organised at home. That's the reason we are organising the event at our farmhouse in Bidadi. I request my workers and well-wishers to avoid attending the event," Kumaraswamy had said in the video.

Karnataka Deputy Chief Minister Ashwath Narayan had on Thursday said that action will be taken against HD Kumaraswamy without a second thought if guidelines were not followed during his son's wedding.

As many as 38 COVID-19 cases were reported in Karnataka from 5 pm on Thursday till 12 pm Friday. Total cases in the state stand at 353, including 82 discharged and 13 deaths, according to Karnataka government.