'Excuse Me, You Are On My Way': This Kerala Restaurant Has Robot Waitresses

Be@Kiwizo (Be At Kiwizo) restaurant, launched on Sunday, is located at the SN Park Road near Gopal Street in Kannur and has pressed into service four robots -- three females and one yet to be named. 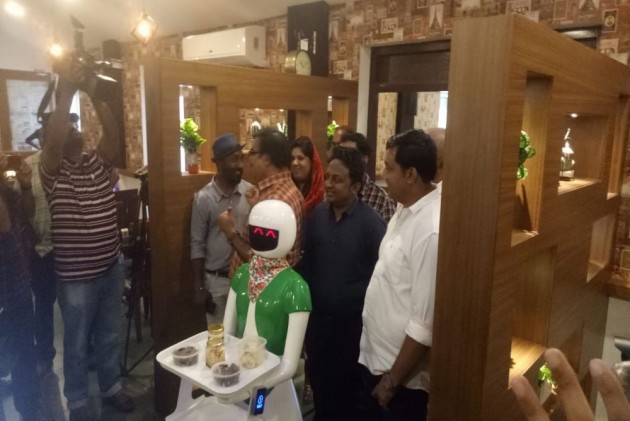 A new restaurant in Kerala's Kannur district has introduced Chinese robots, which serve its customers.

Be@Kiwizo (Be At Kiwizo) restaurant, launched on Sunday, is located at the SN Park Road near Gopal Street in Kannur and has pressed into service four robots -- three females and one yet to be named.

"Three female robots Aleena, Helen and Jane will be waitressing. A small robot (yet to be named) is targeted for interaction and entertainment of children,” Nizamuddin C V, a civil engineer by profession and owner of the restaurant, said.

He further added the startup idea, developed by him and his wife, also has on-board a Malayalam cine star, Maniyanpilla Raju, as a business partner.

“Customers can order their favourite available cuisine through tabs placed on the table. Once the order is received by the kitchen, the cook keeps the food in the mechanised hands of the robot and the order directly goes to the customer's table. The robots identify the intended table through the radio frequency identification (RFID) which is placed near every table,” Nizamuddin said.

Once the food reaches the diner’s table, the customers are supposed to touch the sensor behind the robot to send it back. Despite robots bringing in the sophistication in service, the restaurant owners said the dine-in cost will not be expensive and be on par with other restaurants.

All imported from China, each robot cost Rs. 15 lakhs. The waitress robots are 5 feet tall. These are pre-programmed robots which work on the sensor. The robot walks through the magnetic field fixed in the floor.

If anyone blocks the way of the robot, it says in English, "Excuse me, you are on my way. Would you please make a route? Thank you."

With the capacity of about 100 seats, the restaurant serving vegetarian and non-vegetarian serves lunch and dinner respectively. “If this venture runs smoothly with profitability, we have plans to expand such themed outlets further,” Maniyanpilla Raju, told the media.