Exit polls indicate the voters want to give another chance to Narendra Modi to lead the country. 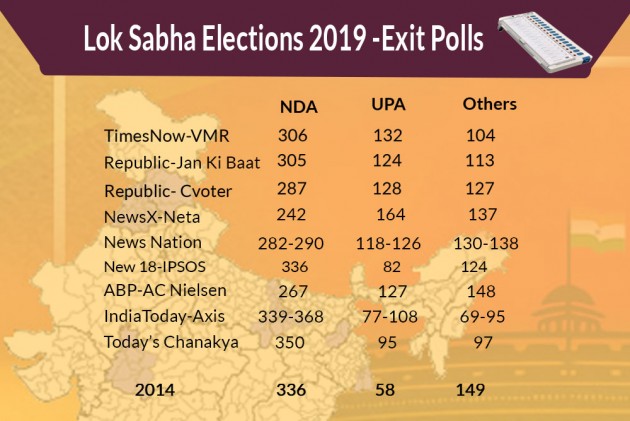 With all the exit polls, without an exception, indicating return of the BJP-led NDA government, it is clear that the voters want to give another chance to Narendra Modi to lead the country. They have gone beyond the concerns of farmers’ distress, job crisis, demonetisation and GST to repose their trust in Prime Minister Modi in absence of a viable alternative.

If the exit polls results hold on the counting day on May 23, it will be an affirmation of shrewd strategising by the BP president Amit Shah, arduous campaigning by Modi and that the narrative of nationalism post-Balakot struck a chord with the voters. Extensive travels by Outlook on ground revealed that the voters did not think that any other leader from the Opposition matched up to Modi.

While reiterating that these are only exit polls, and not the actual result, it seems that Congress’ president refrain of ‘Chowkidar Chor hai’ did not find a resonance with the voters. However, PM Modi’s ‘mahamilawat’ description for the Opposition unity did strike a chord.

Exit Polls Predict No Seat For PDP In Jammu & Kashmir

Going by the exit polls, the SP-BSP-RLD ‘mahagathbandhan’ in Uttar Pradesh has also not been able to hold the BJP back. As per the various polls, the saffron party may not do as well as 2014 when it won 71 of the 80 seats (73 with allies) but it is likely to hold on to at least 45-50 seats. It would also seem from the polls that the BJP has once again managed to trump the caste barrier as it did in 2014, and also in 2017 Assembly polls.

However, the BJP seems to be making up for the loss in UP by expanding into hitherto almost barren territory of Odisha and West Bengal. Master strategist Amit Shah had been working to a well-laid plan to increase the party’s footprint beyond the Hindi heartland states since 2014 itself when Modi-led government came to power. Pragmatic enough to realise that it will be difficult for the BJP to repeat its performance in states like UP, Madhya Pradesh, Rajasthan, Gujarat and Chhattisgarh, Shah strategised the Coromandel Plan to make inroads into coastal states of Tamil Nadu, Odisha and West Bengal, and in the Northeast.

Though exit polls have been off the mark in earlier elections, especially in 2004 and 2009, most of them had got the trend right in 2014 Lok Sabha polls when they had predicted a clear majority for the BJP and its allies. They also caught the trend in subsequent Assembly elections including Gujarat, Madhya Pradesh, Rajasthan and Chhattisgarh.