BJP leader Meenakshi Lekhi was confident that BJP will perform well and claimed that CM Arvind Kejriwal will lose his Assembly seat. 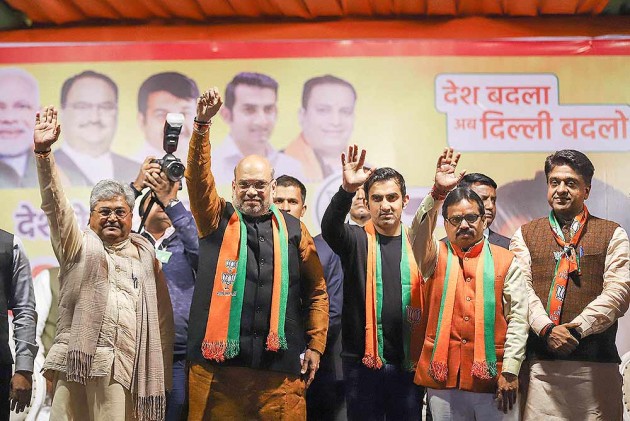 The BJP on Saturday dismissed the exit polls that projected a clean sweep by the Arvind Kejriwal's Aam Aadmi Party in the Assembly elections.

After senior BJP leader and Home Minister Amit Shah held a closed-door meeting with party MPs and senior leaders of the Delhi unit, Meenakshi Lekhi said the exit polls were not "exact".

"We used to have these review meetings daily. Today, this meeting took place a bit early. In this review meeting, we analysed what we, our workers observed on the ground, the strong and weak points. Second, the exit polls were analysed," she said while talking to ANI after a meeting.

While expressing confidence that BJP will perform well, she claimed that Chief Minister Arvind Kejriwal is losing his Assembly seat.

Echoing Lekhi’s views, Union Minister Prakash Javadekar said his party will wait for the "exact polls" and stressed that the BJP will come to power.

"There will be a huge difference in exit polls and the final results. We will wait for exact polls. Exit polls had failed in May elections (17th Lok Sabha polls) as well," Javadekar told ANI.

"We have seen ground reality and we have got a good response. We will come into power on February 11," he added.

Delhi BJP president Manoj Tiwari too has said that exit poll results would be proven wrong.

As Delhi elections concluded this evening, the exit polls predicted that AAP will win a two-thirds majority with some giving it a three-fourth majority in the 70-member assembly

For instance, the ABP News-C Voter poll predicted that AAP will get 49-63 seats and the BJP 5-19 seats. According to the poll, the Congress could win 0-4 seats. The Times Now-Ipsos exit poll predicted 47 seats for AAP and 23 for BJP.

The Congress too rejected the exit polls. Delhi Congress chief Subhash Chopra said his party had done better and it would be proved on February 11.

The AAP had registered a landslide victory in 2015 elections getting 67 of 70 seats. The BJP had won three seats while Congress had failed to open its account.