Almost all gave the BJP-led NDA, which comprises AGP and United People’s Party Liberal more than 70 of the 126 seats on offer. 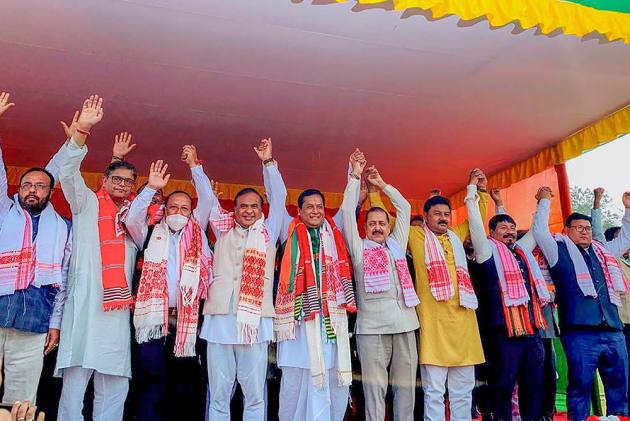 Several exit polls on Thursday indicated the return of the NDA to power in Assam albeit with reduced numbers.

Almost all gave the BJP-led NDA, which also comprises Asom Gana Parishad (AGP) and United People’s Party Liberal, a party based in the Bodoland Territorial Region, more than 70 of the 126 seats on offer.

The Congress-led grand alliance, on the other hand, has been given 40-50 seats with others getting 1-4 seats.

Assam Congress president Ripun Bora was not convinced that the methodology adopted was right. "We are certain we are going to get more than 75 seats. Besides, some are biased, too," he said.

India Today-Axis My India predicted 75-85 seats and 40-50 to the Congress-led Opposition.
According to Republic-CNX, the NDA is expected to get 74-84 seats, Opposition alliance 40-50 seats and others one to three seats.

Times Now-C Voter, on the other hand, is more specific and has given the NDA 72 seats, Congress 53 and others one.

According to Republic-CNX, the NDA would sweep the upper Assam region winning 43-47 seats. If it were to turn out to be true when results are declared on May 2, it would mean that the opposition to the Citizenship Amendment Act, which resulted in the death of five protesters in police firing in 2019, did not wash with the electorate. Besides, the tea tribes would also have voted overwhelmingly for the NDA, which could be attributed to the promises of various welfare schemes for the community besides cash doles given earlier.

Again, in lower Assam, Republic-CNX sees 20-24 seats for the NDA and 24-28 seats for the grand alliance of the about 50 seats. This should come as a surprise because the Muslim vote was supposed to have played the key role in the region and hence favourable to the Congress-AIUDF alliance.

In Barak Valley of southern Assam, NDA has been given 11-19 seats and the Congress alliance 7-9 seats, which, too, would be against what was believed to have happened on the ground. In fact, a BJP leader said this might not be true. Besides, there is a number mismatch if its strictly the Barak Valley.

Assam Jatiya Parishad leader Lurinjyoti Gogoi, who is also a  former general secretary of All Assam Students Union, and at the forefront of the protests against the CAA, was, however, not willing to buy the survey results saying May 2 would throw up different results.

“None will get more than 55 seats. The silent voters and the youth voters have played a significant role in these elections,” he said.

BJP spokesman Rupam Saikia agreed that the NDA was going to form the government. “We never had any doubt about this,” he said, but did not go into dissecting the numbers.