Cyclone Tauktae: Hundreds of people along the affected areas have also been evacuated. 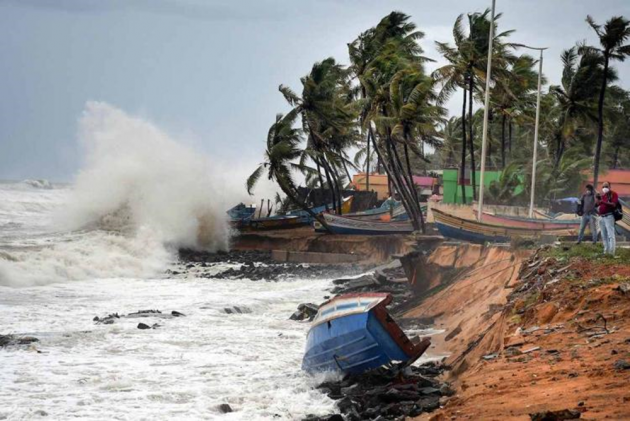 Cyclone Tauktae wreaked havoc across the coastal belt of Kerala, Karnataka, and Goa as it made its way to Gujarat on Sunday. So far, four people have lost their lives and several hundreds of houses have been damaged due to the storm. Hundreds of people along the affected areas have also been evacuated.

The India Meteorological Department (IMD) classified Cyclone Tauktae as a “very severe cyclonic storm" on Sunday. The storm is expected to make landfall on the Gujarat coast within the next 24 hours. It is also expected to intensify by then.

Karnataka has been the worst hit with four people dying due to cyclone-related incidents in the state’s Uttara Kannada, Udupi, Chikkamagaluru, and Shivamogga districts. Authorities have also said that about 70 villages in the state have been affected due to the cyclone.

The cyclone, first in 2021, is likely to cross the Gujarat coast between Porbandar and Mahuva (Bhavnagar district) around May 18 early morning, the weather department said. Tidal waves are likely to inundate several coastal districts during the landfall, it said.

What is a Cyclone?

The term ‘Cyclone’ comes from the Greek word Cyclos' which means a coiling snake. It is a system of wind rotating inwards around a low-pressure area. Caused by atmospheric disturbance, cyclones are usually accompanied by severe weather conditions such as storms.

When are Cyclones named?

When the speed of a storm wind reaches or crosses 74 mph then it is considered to be a Cyclone, hurricane, or typhoon. Only when a storm becomes a Cyclone it is given a name.

How are Cyclones named?

The naming of cyclones is done by World Meteorological Organization/United Nations Economic and Social Commission for Asia and the Pacific (WMO/ESCAP) Panel on Tropical Cyclones (PTC), according to an NDTV report.

Thirteen countries on the panel, including India, Bangladesh, Myanmar, Pakistan, the Maldives, Oman, Sri Lanka, Thailand, Iran, Qatar, Saudi Arabia, United Arab Emirates and Yemen, name cyclones in the region. In 2020, a new list of names was released that had 169 names of cyclones, having 13 suggested names each from 13 countries.

Generally, tropical Cyclones are named, according to regional rules. For example, in the Atlantic and the Southern hemisphere which includes the Indian Ocean and South Pacific, names are given in alphabetical order or it is based on the names of men and women which are alternated.

How cyclone Taukte got its name?

The cyclone has been given the name ‘Tauktae’ (pronounced Tau’te) by Myanmar. It means 'gecko', a highly vocal lizard, in the Burmese language.

The cyclone names are given by countries on rotation basis in region.@mcbbsr pic.twitter.com/AakbZva8gr

Why are cyclones named?

The practice of naming cyclones began in order to identify the storms in warning messages. It is difficult to remember technical numbers and terms of the cyclones for people. So, to increase community preparedness in case of emergency and to make it easier for media reports to spread information cyclones are given names.

What are the bodies responsible for naming the cyclones?