Experts believe the AFSPA has caused more harm to the Indian State in insurgency-hit areas than mitigating problems. Here’s why. 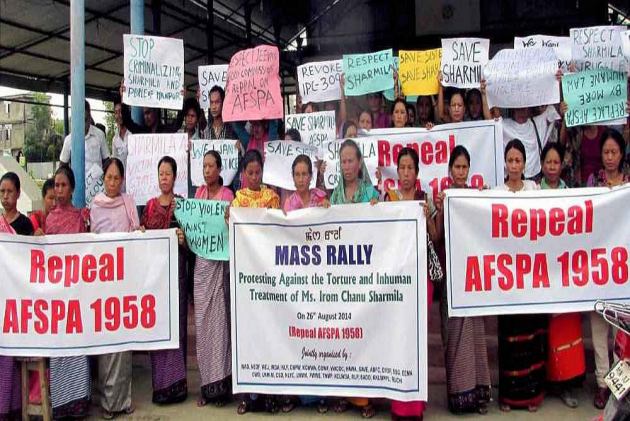 Talking to media at Mon headquarters helipad ground following the mass funeral of coal miners, who were “mistakenly” killed by elite military commandoes, and the civilians who died in a confrontation with the army subsequently, the Chief Minister of Nagaland, Neiphiu Rio, strongly advocated revocation of the Armed Forces Special Powers Act (AFSPA), on Monday, December 6.

Corroborating his views, Meghalaya Chief Minister, Conard Sangma, wrote on Twitter, “AFSPA should be repealed.” Supporting their demand, hours later, former Jammu and Kashmir Chief Minister, Mehbooba Mufti urged the Centre to revoke the controversial law from J&K as well. The law is also effective in Assam besides parts of Manipur and Arunachal Pradesh.

Mufti, who was staging a protest sit-in at Jantar Mantar in New Delhi, cited a sharp contrast between a botched Nagaland ambush and a recent anti-militancy operation at Srinagar’s Hyderpora, in which four persons were killed. Flanked by her party workers, she lamented, “In Nagaland, they have at least handed over the bodies to their families. But in Kashmir, we have to beg for bodies whenever innocent people get killed by the security forces.”

Although separate probes have been ordered in both the Nagaland and Srinagar incidents, there is little hope that the investigations would lead to truth and provide justice to the aggrieved families.

Experts in the field of human rights believe AFSPA, which grants the armed forces wide powers to shoot to kill, has done more harm to the interests of the Indian State in insurgency-hit areas rather than mitigating the political problems. The prolonged continuation of the AFSPA coupled with the policy of rewards linked to the body count of insurgents, they believe, promotes fake encounters due to impunity facilitated by the draconian law.

Following hue and cry last year, the J&K police had filed a charge sheet in the Shopian fake encounter case. It revealed how an army captain Bhoopendra Singh alias Major Basheer Khan allegedly first abducted three young men and then killed them. According to police, he then purposefully planted illegally acquired weapons on their bodies before describing the trio as “hard-core terrorists”. The police investigation alleged that the intention behind the fake encounter was driven by “cash reward”, which is provided by the government to the individuals helping security forces to eliminate militants.

In conflict zones, the state governments have always their hands tied behind back when it comes to prosecuting such officers. Because of the immunity granted under AFSPA, the sanction for instituting legal proceedings has to come from the Centre. And sanctions are hardly accorded. For example, the Ministry of Defence in a misleading written reply told the Parliament on January 1, 2018, “A total of 50 cases have been received by the Union Government from the Government of J&K for Prosecution Sanction against Armed Forces personnel under AFSPA. The reason for denial/pendency of prosecution sanction is on account of lack of sufficient evidence to establish a prima facie case.”

But, the fact is that the Jammu and Kashmir State Human Rights Commission — which was shut down in 2019 — has indicted several military men on the basis of police inquiries and local eye-witness accounts. Many bereaved families haven’t received even ex-gratia relief.

Justice Madan Lokur, a retired Supreme Court, was a part of the Supreme Court bench in 2017 that ordered the Central Bureau of Investigation to probe dozens of extra-judicial killings in Manipur. Commenting on Nagaland killings, he told NDTV recently, “I think there should be an independent investigation done by people - by eminent people... there are sufficient chances for the armed forces to try and cover up the incident.”

In its report on June 6, 2005, the Justice Jeevan Reddy Committee had recommended the repeal of AFSPA, suggesting amendments to the Unlawful Activities (Prevention) Act, 1967 to achieve the purpose of AFSPA. The 2nd Administrative Reforms Commission had endorsed the view of the Justice Jeevan Reddy Committee and a Group of Ministers in the Government of India decided on August 17, 2012, to consult the state governments on this. The process is still on, a bench of Justices Madan Lokur and UU Lalit had observed in the judgement on the Extrajudicial Execution Victims’ Families Association of Manipur vs Union of India in 2016.

Quoting the “Ten Commandments” by the Chief of the Army Staff for counter-insurgency operations, the judgement underlined that “if members of our armed forces are deployed and employed to kill citizens of our country on the mere allegation or suspicion that they are ‘enemy’ not only the rule of law but our democracy would be in grave danger”.

Earlier, the November 1997 judgment of a Constitution Bench in Naga People’s Movement for Human Rights versus Union of India had held that the “power to cause death is relatable to the maintenance of public order in a disturbed area and is to be exercised under definite circumstances”.

But questions are being raised over the official version of the events that led to the Nagaland ambush and civilian deaths in its aftermath. According to Nagaland Police, a group of villagers who converged at the site of the botched ambush on hearing gunshots purportedly witnessed 21 Para SF personnel trying to take the bodies to their base. As per the law, an officer concerned is duty-bound to give “due warning” first to a person against whom the action was to be taken for “acting in contravention of any law or order for the time being in force in the disturbed area”.

Apparently, as per the version of the Nagaland police and the local residents, no such warning was given to the coalminers sitting inside the pick-up van. Even those in the security establishment admit privately that Para 21 Special Forces, which are based in Assam, get operational deployments only after a clearance from the top level.

The incident took place when the Hornbill festival was underway and peace talks with the insurgent groups were underway. Suggesting that the operations should have been suspended or at least the security forces could have shown restraint, they attributed the ambush to a possible handiwork of the deep state that was opposed to stability in the region.

From Northeast to J&K, many security experts believe, AFSPA has remained unsuccessful in ending the insurgency. Even in Punjab, it was the local police that defeated it in the aftermath of Operation Blue Star.

While AFSPA was enforced in Nagaland in 1958, one wonders, as to how long it would continue. Even defence experts acknowledge that the army’s role in the insurgency-hit areas should be short. Once the immediate military objectives are met, the central troops should be pulled out immediately, making way for the political processes to resume. In fact, the insurgency-hit states have always asked for deployment of the locally raised counter-insurgency forces, which demonstrate a better understanding of the local issues, terrain and culture.

For decades, the international human rights organisations have been pointing out how the AFSPA enabled serious human rights violations to be committed by soldiers in J&K and parts of the northeast while shielding those responsible.

With huge unaccounted money available in the name of national security, the beneficiaries of the conflict economy would naturally oppose any step aimed at peace and reconciliation. “Blood on My Hands: Confessions of Staged Encounters (2015)” by Kishalay Bhattacharjee has explored the anatomy of staged encounters in India’s northeast. In his book, Bhattacharjee, a former journalist who currently teaches at Jindal School of Journalism and Communication, has thrown the spotlight on “the hidden policy of extra-judicial killings and how it threatens India’s democracy” through institutionalized human rights abuse.

On December 6, reacting to the Nagaland incident, Bhattacharjee tweeted, “This is an old blood sport by the Indian State, a blot on ‘democracy’ but no leaders in Delhi will sit on a dharna against AFSPA.”