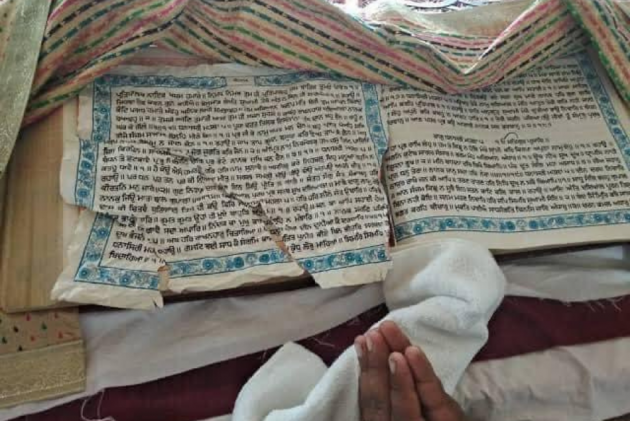 A 35-year-old man was beaten to death at Delhi’s Singhu border last month by the Nihang order of Sikhs over alleged desecration of the Sikh holy book. This has brought Sikhs, Nihangs and their religious practices into the news. The incident infuriated the nation as the victim’s hand and foot were chopped off and he was tied upside down from a barricade, where he bled to death. The incident has polarised many within Punjab and beyond it.

What is Guru Granth Sahib Ji?

Nihangs: All You Need To Know About This Sikh Sect

“Guru Granth Sahib or Adi Sri Granth Sahib Ji is more than scripture or a book for Sikhs; they regard and respect the Granth as their living guru. Before passing away, Guru Gobind Singh Ji gave this message to the Khalsa Panth (followers of Sikh religion): ‘Sab Sikhan ko hukum hai Guru manyo Granth’, meaning ‘All Sikhs are commanded to take the Granth as their Guru’. So, Sikhism has 10 gurus in human form and the 11th is in the form of the Granth. Guru Granth Sahib Ji not only has the teachings (gurbani) of all the gurus, but also the writings of saints like Kabir, Bhagat Ravi Das Ji and other compeers of Islam and Hinduism who believed that God is one and condemned casteism and superstitions. Any scripture carrying guru ki baani is important,” explains the Nihang Sikh who is also a Granthi of a gurdwara in Punjab’s Hoshiarpur area.

What does 'beadbi' or sacrilege of Guru Granth Sahib Ji mean?

“Beadbi means being disrespectful towards Guru Granth Sahib Ji. It can be interpreted in so many ways. For me, beadbi is an insult to the gurus, the maryada, Sri Dhan Guru Granth Sahib ji Maharaj. For instance, when you enter the premises where Guru Granth Sahib Ji or any part of it is kept, you have to follow certain rules like covering your head, not wearing shoes, being clean, not consuming alcohol, tobacco and non-vegetarian food. Always wash your hands, face and feet before touching Guru Granth Sahib Ji. Even wrong pronunciation of gurbani is regarded as beadbi,” says Gurjeet Singh.

“But lately beadbi has become a common practice with instances of Guru Granth Sahib Ji’s pages being torn, even burnt. Unfortunately, nothing has been done in this matter. ‘Sade Guru di raksha appa jaan de kiti hai, Sikhi sanu saukhi nhi mili asi kamai hai’ (We always laid our life for Guru, we have earned Sikhi with many sacrifices and it was not easy),” adds Singh.

When the incidents of sacrilege have been happening for the past few years, why was such a gruesome step taken now?

“The incidents have been happening in the past, but the law and justice system failed to punish the culprits. The last incident of beadbi added fuel to the fire of rage, as an alleged Dera follower threw a lit cigarette on the Jathedar performing kirtan at Anandpur Sahib Gurudwara, which is one of the five takhts of Sikhism. Gurudwara is regarded as one of the safest places, but such an incident happening in the presence of everyone was a huge disrespect. It is the duty of Nihang Sikhs to protect the guru and the place where guru sahib resides. The accused was handed over to police, but the damage was done.

The incident at Singhu border happened under the nose of Nihang Sikhs and this was their personal failure. As the accused Nihangs said, lynching of Lakhbir Singh was an act to create fear in the public that guru sahib cannot be disrespected under any circumstances,” explains Kamaldeep Singh Brar.

Do you think the killing of Lakhbir Singh could have been prevented if the police had succeeded in catching the culprits in past cases of sacrilege?

“When a person is charged with blasphemy, he/she can be booked only under section 295A of Indian Penal Code. And in many cases the definition of blasphemy varies from person to person. For example, Guru Granth Sahib Ji is just a book for others, but for Sikhs it is their Guru! So yes, strict laws are needed to prevent such incidents not just for Sikhs, but for people of other religions too, as one should not play with someone’s beliefs or try to harm religious places or symbols.

I’m sure the justice system tried its best to investigate these incidents, but they are sensitive issues, and many times there was no evidence, and even if arrests were made, the accused were either poor or mentally unstable, or the police had no evidence against them. The sacrilege incidents are political conspiracies; we all understand that, yet cannot prove it.

I don’t know whether the murder of Lakhbir Singh could have been prevented or not, but what I do know is we need strict laws to tackle matters like this,” says Brar.

Do you think the fact that Lakhbir Singh was a Dalit who touched the holy book is why the Nihangs killed him?

“No, caste has nothing to do with this. In fact, two accused in murder case, Narain Singh and Sarabjit Singh, are also from the Dalit community (They are Majhabi Sikhs). In Sikhism, there is no caste...everyone is allowed inside gurudwara sahib, can eat langar in the pangat and even become Granthi (ceremonial reader of Guru Granth Sahib Ji) provided the person is in Sikhi suroop (Amrit dhari Sikh). Akal Takht’s Jathedar is a Dalit Sikh and many raagi jathe are Dalit Sikhs!