As the enthusiasm of BJP leader Raje's supporters is at its peak ,after her show of strength, the BJP state unit is planning to neutralise the impact by inviting Home Minister Amit Shah to address workers meet in Jaipur on December 5. 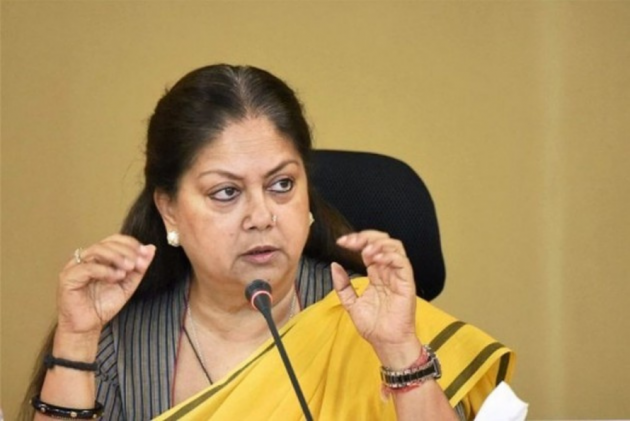 The Bharatiya Janta Party leader Vasundhara Raje's four days 'Dev Darshan' (religious tour) has concluded on Friday. Raje may have made every attempt of giving her trip a 'religious' flavour but the party's state unit see's it as a show of strength.

Although Raje is calling her yatra 'non-political', she is addressing public meetings to give political messages. In all six districts where Raje visited, her cavalcade saw a grand welcome and people gathered to meet her. The Ajmer division was the last junction of her tour.

On Friday, the former CM visited the Brahma temple and also visited the Ajmer Dargah in the evening. While Raje did not speak to the public unlike at other places, but her supporters surrounded her to showcase strength.

" At Brahma temple, she prayed for peace to the souls and strength of their families who lost lives in the pandemic", said a supporter accompanying Raje in the Ajmer division.

In Bhilwara, while addressing people on the fourth day, Raje said, “Victory and defeat are two sides of the same coin. BJP workers should not be disheartened because success lies in failure". Raje's words were for the supporters in the Mewar area, days after the BJP lost the bypolls to the state Assembly.

Raje who further referred to former Prime Minister Atal Bihari Vajpayee's statement added, "Only speeches and statements will not help, groundwork is needed to build trust in people. We have to live up to their expectations and work hard".

In the recent bypolls, the BJP lost both the seats by huge margins, with its candidates finishing third and fourth respectively in the electoral contest. Congress candidates Nagraj Meena and Preeti Shaktawat won Dhariawad and Vallabhnagar assembly constituencies with margins of 18,725 and 20,606 votes, respectively. In Vallabhnagar, the BJP gave a ticket to Himmat Singh Jhala while it fielded Khet Singh in Dhariyawad.

According to party insiders, the infighting within the party and poor selection of candidates are the two reasons being attributed to the loss of the saffron party in the recent by-elections.

Raje, who toured in the southern part of Rajasthan in the initial two days of her yatra said, ''This four days programme is not political. My daughter-in-law was unwell for the last year. And with the blessings of Sawaliya Seth (a local deity) she is well for past 10 months,  she is doing fine now."

Raje while addressing a gathering after offering prayers at the Sanwaliya temple also said, "Due to her deteriorating health, I could not come to express my condolences on the death of our colleagues, so I have come now". Raje visited the houses of her former colleagues and MLAs Kiran Maheshwari and Jeetmal Khant, who died during the Covid-19.

As the enthusiasm of Raje's supporters is at its peak after BJP leader Vasundhara Raje's show of strength, the state unit of her party is planning to neutralise the impact by inviting Union Home Minister Amit Shah to address workers meet in Jaipur on December 5.

"We are inviting Shah to address the State Working Committee meeting and he will also address a public representatives conference to boost the morale of BJP workers", a senior BJP leader told Outlook.

This is not for the first time that Raje's tour has turned into a show of strength. Earlier this year in October, Raje visited Jodhpur to offer condolences to Union minister Gajendra Singh Shekhawat on the death of his mother. She also visited the former minister Mahipal Maderna’s house to pay her tributes to the Congress leader who died in October.

Maderna was the key accused in the Bhanwari Devi murder case. During March last year, on her birthday she went to Bharatpur for pilgrimage but it also turned out to be a show of strength.

In January 2021, Raje supporters created the ‘Vasundhara Raje Samarthak Manch Rajasthan’, and demanded that Raje be nominated the party’s chief ministerial face for the 2023 elections. Similarly in August 2021, Manch had recently launched an office in Jaipur’s Sanganer that created a murmur within the party.

In the Rajasthan Bharatiya Janta Party, the infighting between the Vasundhara Raje faction and the state Rajasthan president Satish Poonia is an open secret. The in-fighting in the Rajasthan BJP dates back to the 2018 assembly elections. After losing the elections, Raje was sidelined by the central leadership. In June this year, BJP Rajasthan in charge of Arun Singh had warned party leaders that strict action would be taken against those trying to create factions in the party.

In October Vasundhara Raje, while responding to a question on BJP leaders in Rajasthan eying the top post, said that it doesn’t happen just by hoping and only someone who has the support and love from all communities will get to rule.