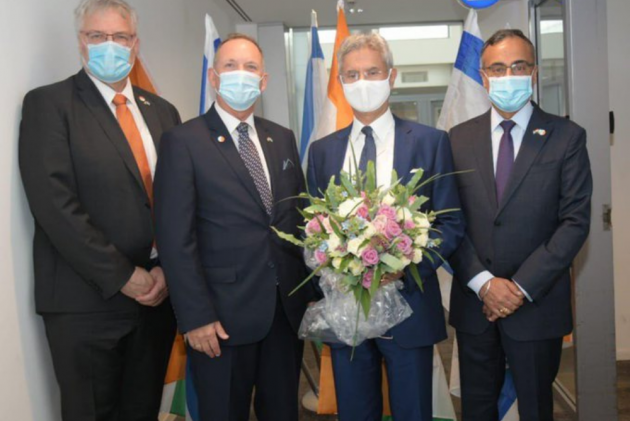 Union External Affairs Minister S Jaishankar arrived in Israel on Sunday on his five-day visit to the country.

Jaishankar during his visit will hold talks with Israel’s top leadership to mutually prepare a roadmap for further enhancement of strategic ties.

He will also explore new areas of bilateral collaboration with the Israel.

This is Jaishankar's first visit to the country as the External Affairs Minister.

“Shalom Israel! Arrived on my first visit as External Affairs Minister. Looking forward to a great visit,” he said on Twitter.

He will also be holding talks with leading academics from all over Israel, business community leaders and interacting with the Indian Jewish community.

Jaishankar will also be visiting places of historical significance to India, demonstrating its long-term presence in the region and constructive role played in shaping the history of the region.

The visit will kick off with the External Affairs Minister paying tributes to brave Indian soldiers, who laid down their lives in the region during the World War I at the Talpiyot cemetery in Jerusalem.

About 900 Indian soldiers are interred in cemeteries across Israel in Jerusalem, Ramle and Haifa.

The heroics of the Indian soldiers have prominently come to light here during the past two decades and the story of liberation of the northern coastal city of Haifa, in what most war historians consider “the last great cavalry campaign in history”, has become a household tale with its inclusion in the city's local history textbooks.

Major Dalpat Singh, widely popular as the Hero of Haifa, was awarded a military cross for his bravery.

Indian cavalry regiments armed with spears and swords had displayed the highest tradition of valour and cleared the enemy from the rocky slopes of Mount Carmel.

In a symbolic gesture of friendship with Israel, India renamed the iconic Teen Murti Chowk, a war memorial, during the visit of then Israeli prime minister Benjamin Netanyahu to Delhi in January 2018 to Teen Murti Haifa Chowk.

Prime Minister Narendra Modi visited the Haifa cemetery during his visit to Israel in July 2017 and unveiled a plaque commemorating Major Dalpat Singh for his critical role in the liberation of the city.

"I am deeply honoured to stand here today to salute the valiant Indian soldiers, who laid down their lives for the liberation of Haifa during the WW I," Modi had written in the guest book.

"The exceptional bravery and supreme sacrifice of Major Thakur Dalpat Singh MC, the "Hero of Haifa" and his men, will be remembered forever and continue to inspire generations to come.

“Next year, the centenary of the battle of Haifa will present another opportunity to mark this enduring bond between India and Israel," he wrote.

The 61st Cavalry, the name given to the unit created after the merger of cavalry units after independence, sent a contingent to Israel in 2018 to participate in the centenary celebrations.

The Israel Post had issued a commemorative stamp in 2018 in appreciation of Indian soldiers' role in liberating the city.

His other engagements on his first day of the visit includes Chairing India-Israel Business Roundtable and meeting the Indian Jewish community and Indologists in the evening.

The roundtable discussions on promoting bilateral trade ties would include leading officials of almost all the important business organisations in Israel.

He will also be releasing a book, Bombay/Mumbai: City Heritage Walks" by Prof. Shaul Sapir, an India born scholar, who was a Professor at the prestigious Hebrew University of Jerusalem.

The book outlines the excellent way to discover the city's old Colonial architectural gems and to enjoy a glimpse of the glory of the city in the days of the British Raj.

India and Israel elevated bilateral relations to a strategic partnership during the historic visit of Prime Minister Modi to Israel in July 2017.

Since then, the relationship between the two countries has focused on expanding knowledge-based partnership, which includes collaboration in innovation and research, including boosting the 'Make in India' initiative, the Ministry of External Affairs said in a statement ahead of his departure.

The ground for the visit was laid down during a telephonic conversation between Prime Minister Modi with his Israeli counterpart Bennett in August with the two leaders agreeing on the potential to further expand cooperation and deciding that the foreign ministries of the two countries would work on preparing a roadmap for further enriching the India-Israel strategic partnership.

Lapid had also separately extended an invitation to Jaishankar.

During their telephonic conversation, Modi reiterated his congratulations to Bennett for assuming office as the Israeli Prime Minister in June.

Modi also emphasised that India greatly values its robust cooperation with Israel in areas like agriculture, water, defence and security, and cyber-security.

Recalling that next year would mark the 30th anniversary of the establishment of diplomatic relations between India and Israel, Prime Minister Modi extended an invitation to Bennett to visit India.

India is the largest buyer of Israel's military hardware and the latter has been supplying various weapon systems, missiles and unmanned aerial vehicles over the last few years but the transactions have largely remained behind the curtains. (With PTI inputs)