Amid reports of 16 Afghan evacuees testing Covid-19 positive upon returning to India, the Indo Tibetan Border Police on Wednesday cleared the air in a tweet. 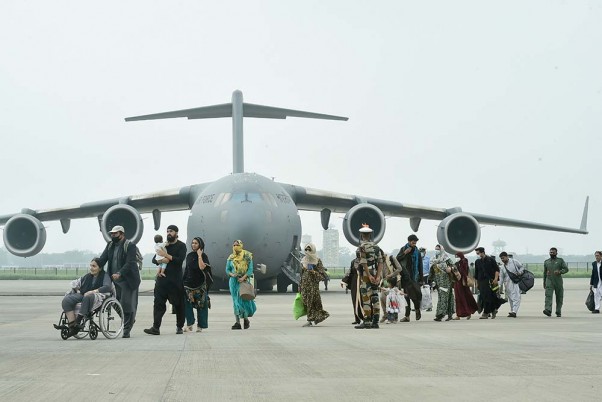 Even as Indian continues to evacuate stranded Indian citizens, Hindus and Sikhs from the war-ravaged Afghanistan, reports of evacuees returning to the country and testing positive for Covid-19 caused concern among several sections of the country on Wednesday.

According to reports, about 16 out of 78 evacuees from Afghanistan that landed in India on Tuesday tested positive for Covid-19.

While at least 10 evacuees from Afghanistan were initially reported to have tested COVID-19 positive after their arrival at the Indira Gandhi International airport in Delhi on Tuesday. Later reports cited the number to be 16.

So did the Afghan evacuees really test Covid-19 positive?

Turns out, they didn’t.  The Indo Tibetan Border Police on Wednesday clarified that nobody returning from Afghanistan had tested positive for the virus yet.

All the evacuees are currently quarantining at the ITBP's quarantine facility at Chhawla Camp in southwest Delhi.

There are no (no) #Covid19 positive cases out of 78 persons (Who came from #Afghanistan last night) who are presently under institutional quarantine at ITBP Quarantine Facility at Chhawla Camp, New Delhi. pic.twitter.com/d3tvHabkTz

Then why the reports about infection among evacuees?

“Some people have tested positive for the infection. However, there is no clarity on their count," said Sources at the LNJP Hospital said two Indian nationals, who were among the people brought to India from Afghanistan, have been admitted to its Covid ward after testing positive.” Chandok had said.

Sources at the LNJP Hospital had also reportedly told the news agency that two Indian nationals, who were among the people brought to India from Afghanistan, have been admitted to its Covid ward after testing positive.

"These two patients are male and their condition is stable. They were brought to the LNJP Hospital yesterday," an official source told PTI.

By Wednesday, reports of 16 persons having tested positive for Covid-19 were doing the rounds in the media. By Wednesday afternoon, however, ITBP cleared the air on Twitter.

How many people have India brought back from Afghanistan so far?

According to PTI, till Tuesday evening, India had brought over 800 people from Afghanistan as part of the evacuation mission that began on August 16, a day after Kabul fell to the Taliban.

Thousands of Afghans have been crowding around the Kabul airport for nearly a week, in a desperate attempt to flee the country fearing the Taliban's brutality.

India is carrying out the evacuation missions in coordination with the US and several other friendly countries.

Do Afghan evacuees have to follow any Covid-19 protocols?

Yes. The Union health ministry has issued a memorandum mandating compulsory minimum 14 days institutional quarantine for those being evacuated from Afghanistan, at the ITBP Chhawla Camp here, amid the COVID-19 pandemic outbreak.

The ministry said the Centre is undertaking emergency evacuation of people from Afghanistan to India and considering the nature of the crisis, it has already allowed exemption from mandatory pre-boarding RT-PCTR testing (presently mandated for international travellers) for people who have been evacuated from the war-torn country.

"Coronavirus transmission (including circulation of variants) in Afghanistan is unclear at present, as a matter of abundant precaution, it has been decided that the arriving persons shall undergo a mandatory minimum 14 days institutional quarantine at Sector Headquarters Logistic and Communications, Indo Tibetan Border Police (ITBP), Chhawla Camp, Najafgarh Road, New Delhi," the office memorandum dated August 23 said.

"The Ministry of External Affairs and the Ministry of Civil Aviation shall intimate ITBP adequately in advance about the exact date and timing of these incoming flights along with the passenger manifest.