Kiran Bedi Shares Video Of Sun Chanting Om. But It Is Fake

According to NASA, the Sun is not silent. But does it chant Om? 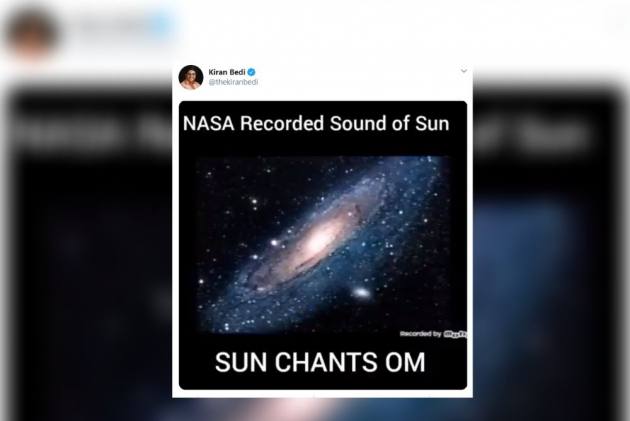 Lieutenant Governor of Puducherry, Kiran Bedi, on Saturday shared a video that claimed the sound of the Sun was Om.

The post received wide traction but triggered hilarious responses. Besides, the retired IPS officer was criticised for sharing the video that lacked any authenticity.

But does the Sun really chant Om?

NASA released a video in July 2018 and said that the Sun is not silent. The video captures the vibrations produced by the movement of the Sun's waves, loops and eruptions. The hum it produces does not sound similar or close to Om.

The Sun is not silent. The low, pulsing hum of our star's heartbeat allows scientists to peer inside, revealing huge rivers of solar material flowing, along with waves, loops and eruptions. This helps scientists study what can’t be seen. Listen in: https://t.co/J4ZC3hUwtL pic.twitter.com/lw30NIEob2

But NASA has nowhere mentioned that the sound produced by the Sun has a similarity with the Om. The sound of the sun can be heard on the SoundCloud also.

According to NASA, "Data from ESA (European Space Agency) and NASA’s Solar and Heliospheric Observatory (SOHO) has captured the dynamic movement of the Sun’s atmosphere for over 20 years. Today, we can hear the Sun’s movement — all of its waves, loops and eruptions — with our own ears."

It said the sound helps scientists to "study what can’t be observed with the naked eye".

Interestingly, the video shared by Bedi has been in circulation since 2017, a year before NASA discovered that the Sun emanated sound.