Mehal, a resident of village Vaan Tara Singh here, said Jugraj had no intention to hoist the 'Nishan Sahib', a symbol of Sikh religion, at the Red Fort. 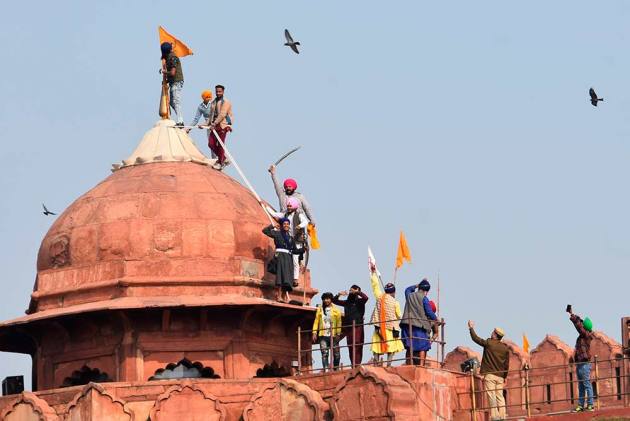 The family of a young Punjab man who has been accused of hoisting a religious flag atop the Red Fort defended him and said that he was innocent as he agreed to climb up the flagpole when other protesters asked him to do so.

The accused man, Jugrag's grandfather, Mehal Singh, said his grandson had gone to the Delhi border with a group of farmers for participating in the farmers’ agitation and the tractor parade Tuesday against the Centre's three new farm laws.

There was a massive outrage after a religious flag was hoisted at the Red Fort during the tractor rally.

Farmer Who Died Returned From Australia, Family Unaware He Was In Delhi

Mehal, a resident of village Vaan Tara Singh here, said Jugraj had no intention to hoist the 'Nishan Sahib', a symbol of Sikh religion, at the Red Fort.

"A fellow protester asked him (Jugraj) to climb the flagpole after others could not do so. Jugraj then agreed to climb up the flagpole to hoist the flag," Mehal said about his grandson. "He is innocent."

He expressed fear that the police would now conduct raids at their house to catch the young man.

Jugraj is son of Baldev Singh who has three other children. The family owns three acres of farmland in the village.

Wielding sticks and clubs and holding the tricolour and union flags, tens of thousands of farmers atop tractors broke barriers, had clashed with police and had entered the national capital from various points to lay siege to the Red Fort.

After entering the Red Fort, protesters put up the 'Nishan Sahib' and a farmer flag on a flagpole, which triggered massive outrage across the country.

The 'Nishan Sahib' flag, a symbol of Sikh religion, is seen at all Gurdwara complexes.