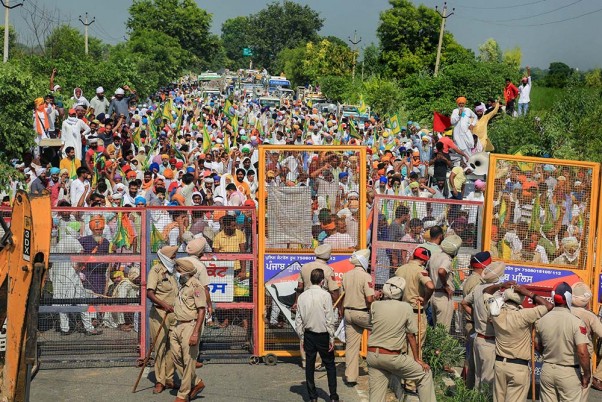 A farmer’s attempted suicide in Punjab on Friday signaled more problems for the Narendra Modi government over three contentious bills which have led to cracks in the BJP-led ruling alliance at the Centre amid an intensifying peasant agitation across the country.

Harsimrat Kaur Badal of the Akali Dal, one of the BJP’s oldest allies, quit the Modi cabinet on Thursday in protest against the bills, which the government says would double farmers’ income through greater market access and unburden agricultural trade from all restrictions. The bills seek to open up the farm sector to more competition, modernise supply chains by allowing bigger agribusinesses to engage directly with farmers and create seamless access to markets.

Critics, including opposition parliamentarians, however, say that the bills will dilute the country’s public procurement system and lead to exploitation by private companies. The bills have already been passed by the Lok Sabha, where the ruling alliance has a brute majority.

Assembly elections are due in Bihar by October-November and a few other states by mid-2021 and Prime Minister Modi on Friday defended the bills, saying they will do away with middlemen who have been eating  into farmers’ profits over the years. In an address to people in Bihar where he inaugurated several rail-related projects, Modi also hit out at the opposition for spreading “misinformation” about the proposed laws.

Around 60 percent of India’s population depends on farming for livelihood and the government faces the tough task of pacifying this crucial segment of voters, already reeling under the impact of the coronavirus pandemic which had dealt a crippling blow to the economy.

Farmers’ organisations appeared to be in no mood to relent as they announced plans to intensify their agitation from September 20, when they are likely to go for
blockading highways and railway tracks.

“With the government withdrawing from its responsibility of assuring fair returns and leaving farmers at the mercy of the private sector, we have no recourse except to step up our agitation,” said Shamsher Singh, spokesperson of the Bhoomi Bachao Sangharsh Samiti, an influential farmers’ body which is among those spearheading the agitation.

Prabhakar Kelkar, vice president of the BJP-allied Bharatiya Kisan Sangh, said anticipated intensification of agitation by famers’ outfits across the country. The farmers’ discontent, according to Kelkar, is over uncertainty of payments, which as per the new ordinance, have to be made within three days. But in reality, many of the small farmers in Madhya Pradesh, for instance, are facing problems of not finding buyers or alternatively being pressurised to bring in larger quantities.

At present, farm produce are sold mainly in notified wholesale markets run by the agricultural produce marketing committees (APMCs) under state laws. The APMCs require farmers to only sell to licensed middlemen in these markets rather than in open markets, which economists say hurt the possibility of more profits. One of the bills enables farmers and buyers to trade outside these tax-free markets.

However, critics say that the small time-frame are forcing farmers to approach undocumented traders. Unlike in APMC-managed mandis, where records of transactions are maintained, there is little means to track these unregistered traders. This has led to many farmers being cheated of their dues, the critics allege.

In many instances, traders and mandi workers are behind rising agitation as opening of more sales avenues has led to mandi-based traders fearing a sharp drop in their business and market influence. In direct correlation to the drop in mandi business is the fear of workers in the yards, their numbers can be anywhere between a few thousands to around 50,000, that their avenue for wages will be hit.

In Punjab and Haryana, which are among states from where the central agencies make most purchases, including for the public distribution system, there is an additional fear that farmers may miss out on getting an assured price or MSP, which is often more than the market price, particularly during times of surplus. Given the good monsoon this year and expectations of a bumper crop, this cannot be discounted unless the government intervenes to ensure fair price for farmers.