Observers consider it even bigger than the anti-displacement land movement of 2006-08 in Singur-Nandigram-Kalinganagr resulting in the scrapping of an archaic land acquisition act in 2013. 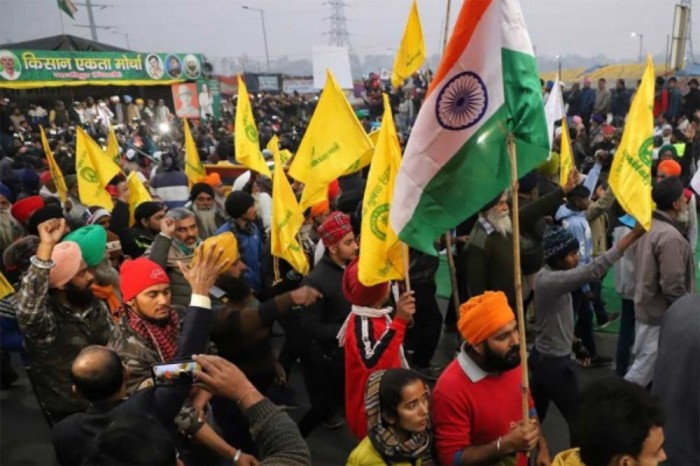 The movement against displacement of farmers by forcible land acquisition for private industrial projects in Singur and Nandigram of West Bengal and Kalinganagar in Odisha, among other places, during 2006-2008 had resulted in the scrapping of the archaic Land Acquisition Act of 1894, which was replaced by a more farmer-friendly Land Acquisition Act in 2013 during the last leg of the United Progressive Alliance (UPA)’s second term in the Union government.

It was then considered one of the biggest victories of a farmers’ movement in the country in recent times.

But Friday’s victory, coming with Prime Minister Narendra Modi announcing the government’s decision to repeal three farm-related legislations that had been enacted last year but could not be implemented, is being seen as an even bigger victory. The farm laws allegedly allowed ‘corporatisation of agriculture.’

Columnist Ajay Gudavarthy, an associate professor at the Centre for Political Studies at the JNU, agreed that it was the biggest victory of a farmers’ movement in the past two decades. He said that the Samyukta Kisan Morcha’s movement was qualitatively different from the anti-displacement movement, or other farmers’ protests of the past, in the way that it included rich farmers, many of whom were part of the ‘ruling hegemony of a society’.

“When the people from the ruling hegemony join a mass movement, it helps in the terms of sustenance and resources. It was commendable the way the Samyukta Kisan Morcha leadership dealt with all the vilification narratives peddled by the BJP and the RSS,” said Gudavarthy, adding that the movement’s leadership displayed unprecedented confidence in dealing with issues regarding nationalism, communal difference and the model of development.

"How many mass movements' leadership dared to stand by the Bhima-Koregaon prisoners? But the Kisan Morcha supported them. It is the participation of the ruling hegemony, the big peasantry in the green revolution belt, which gave the movement's leadership such noticeable confidence," he said.

Just like the present movement led by the umbrella outfit of Samyukta Kisan Morcha, the anti-displacement movements, too, saw forces engaged in political, human rights, environmental and cultural activism of different affiliation coming together under a common umbrella. In Kalinganagar, the movement was spearheaded by Visthapan Virodhi Jan Manch (VVJM), while there was the Krishi Jami Raksha Committee (KJRC) in Singur and the Bhumi Uchchhed Pratirodh Committee (BUPC) in Nandigram. Some other anti-SEZ movements had taken shape in Chhattisgarh and Maharashtra during that time.

The Singur-Nandigram movement during 2006-08 paved the way for the downfall of the Left Front government, which had been ruling West Bengal since 1977, in 2011. The Trinamool Congress (TMC) chief Mamata Banerjee resurrected herself from political nadir by managing to take the leading role in these movements. Her government has not attempted forcible land acquisition in its 10 year rule.

“The present government cannot be compared with the other previous governments dealing with the farmers’ struggle. This government cares nothing about civility and has not been listening to any opposition party while enacting one after another anti-people laws. They have been unstoppable inside the Parliament,” said Bengali theatre and screen actor Joyraj Bhattacharjee, who had taken part in the anti-displacement movement at Singur-Nandigram and also the recent anti-farm laws movement.

In solidarity with the anti-farm law movement, the 41-year-old actor, along with three other younger cultural activists, marched from Calcutta’s neighbouring district of Howrah to Bihar’s border with Uttar Pradesh over 10 days during end-December and early-January and took a train from Bihar-Uttar Pradesh border to join the protesters at Singhu border, where they spent several days in solidarity with the farmers. They did not walk through Uttar Pradesh after other activists advised against it, telling them that the government in Uttar Pradesh could arrest them.

The movement in Singur did not see an armed conflict but in Nandigram in 2007, several persons lost lives in armed conflicts between the supporters of the state’s then ruling party, the CPI(Marxist) better known as the CPI(M) and the BUPC, apart from the death of 13 persons in police firing. The movement in Kalinganagar against displacement of farmers for a Tata Steel project too witnessed bloodshed in 2006 when 13 persons had died in an incident of police firing in January 2006.

“The movement against displacement and SEZs 2006 onwards, at places including Singur, Nandigram and Kalinganagar, had a crucial role behind the scrapping of the LA Act of 1894 in 2013. However, soon after coming to power in 2014, the Modi government tried to dilute the new law to enable big corporates acquire land at ease. The government was finally prevented from making the amends. This one is definitely the biggest victory of them all, because now the government has been forced to repeal an Act that they had passed in the Parliament,” said Bhattacharya.

“The anti-displacement movement and the anti-farm laws movement had both seen a major involvement of many small organisations and the civil society, challenged laws and were long-drawn. He added, “The prime lesson from both the movements is that the biggest battles are fought on the streets and not inside the legislative houses.”

Political scientist Dwaipayan Bhattacharyya, a professor at the Centre for political studies at the Jawaharlal Nehru University in New Delhi, said that the victory of the Samyukta Kisan Morcha-led movement also showed that ethically conducted protest politics aimed at strengthening the democratic content of India’s constitution has tremendous potential for success, he said.

“The anti-displacement movement was more scattered and aimed against different state government’s policies while the Union government did not play an aggressive role against the farmers. But here, the Union government, which since 2014 – and particularly since 2019 – became highly centralised and capable of using its undisputed majority in the parliament against a scattered opposition, was a much tougher opponent to the protesters,” Bhattacharyya said.

The professor added that the anti-farm law movement was also qualitatively different from the anti-displacement movements as it was being conducted when ‘normal’ politics was in suspension due to the pandemic. The Samyukta Kisan Morcha also did not allow any political party or organisation to control the movement.

“Rather, they dictated terms to political parties and despite all the provocations from the government and the country’s ruling party, and the heavy sacrifices of its participants, the movement managed to remain peaceful,” he said.