Over 10 rounds of talks with the government, which has been projecting the laws at major agricultural reforms, have failed to break the deadlock between the two sides. 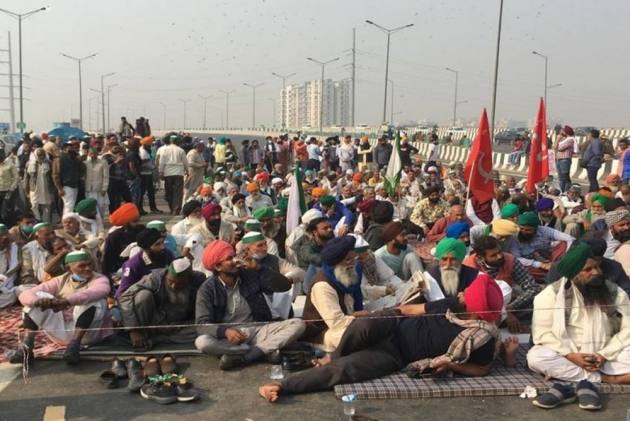 Day one of a mock parliament session by a group of 200 protesting farmers in central Delhi was held amidst tight security on Thursday, July 22.

Farmers protesting over the Centre's three agriculture laws began a 'Kisan Sansad' at Jantar Mantar. Delhi Police set up barricades, parked water cannons around the venue as it was metres away from Parliament, where Monsoon Session began this week.

Allegations and counterclaims marked the day as the farmers said that police had stopped them on their way, thus delaying their arrival at the venue.

‘It’s An Unethical Govt, We Suspect They Snooped On Us Too’: Protesting Farmer Leaders

On the other hand, some Bharatiya Janata Party (BJP) leaders claimed that there was a ruckus at Jantar Mantar where a news channel cameraman was injured.

However, till the time of writing this report, there was no report of any serious law-and-order problem.

The farmers reached Jantar Mantar from their Singhu border protest site in buses with police escort.

Delhi police had asked the Samyukta Kisan Morcha (SKM) – a joint platform of several farmer unions – to keep the number of participants less. Neither the police nor farmers wanted a large gathering after the Republic Day incident.

On January 26, a tractor parade held by the protestors had led to anarchy on Delhi’s roads. Security barriers were pulled down, and there were clashes with the police. Some stormed the Red Fort and hoisted a religious flag on the ramparts. Several were arrested later.

Meanwhile, in Parliament, Agriculture and Farmers Welfare Minister Narendra Singh Tomar reiterated that the laws are in peasants’ interests. He told reporters that the laws would help increase their income and free them of legal hassles.

“The government has been sympathetic to their cause. We have held discussions earlier and if the farmers tell us of any specific provision in a law where they have reservations, the government is ready to discuss,” Tomar told the media.

When asked about the SKM’s intent of seeking a mandate against the BJP in forthcoming state polls, the minister answered, “In a democracy, everybody has a right to participate in the poll process but I still think if they have any problems with the (farm) laws they should come forward and talk. The government is ready for a discussion in the Parliament as well.”

Several opposition parties are supporting the farmers’ protest. Rahul Gandhi led Congress MPs in a demonstration in the Parliament complex in support of the protesting farmers. They sought a repeal of the three laws.

At Jantar Mantar, PTI adds, Police threw a ring of security around central Delhi given the protest and kept a tight vigil on the movement of vehicles.

Adequate security arrangements have been made and both police and paramilitary personnel have deployed, they said.

A senior police officer said around 5,000 security personnel have been deployed across the New Delhi district.

Four companies of paramilitary force have been deployed in and around Jantar Mantar, police said.

Deputy Commissioner of Police (New Delhi) Deepak Yadav said, "Several companies of CRPF and RAF have been deployed at the Jantar Mantar. CCTV cameras have also been placed in the area."

Barricades along with metal detectors have been placed on either side of the Jantar Mantar and two water cannon machines have also been stationed, they said.

Initially, media persons were not allowed to enter the area where the 'Kisan Sanasad' was going on. However, after checking their ID cards, they were later permitted to go inside.

Thousands of farmers from across the country have been agitating at three Delhi border points – Singhu, Tikri, and Ghazipur – against the three farm laws that they claim will do away with the minimum support price system, leaving them at the mercy of big corporations.

Over 10 rounds of talks with the government, which has been projecting the laws at major agricultural reforms, have failed to break the deadlock between the two sides.