The two-day national convention, which has 1,500 registered delegates and leaders of 500 farmer groups including Hannan Mollah and Rakesh Tikait, addressing various issues including need for making minimum support price (MSP) mandatory and uniform across the country 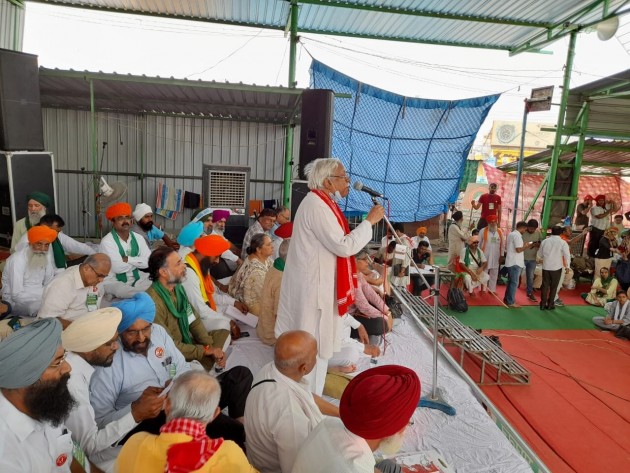 Marking nine months of the ongoing protest against three new farm legislations enacted last year, hundreds of farmers gathered on Thursday at Singhu border of the national capital in a major exercise towards creating a national platform for farmers, fishermen, women farmers, tribals among others.

The two-day national convention, which has 1,500 registered delegates and leaders of 500 farmer groups including Hannan Mollah and Rakesh Tikait, addressing various issues including need for making minimum support price (MSP) mandatory  and uniform across the country unlike the present scenario where state governments are fixing different prices as seen currently in the case of sugarcane.

“The main purpose of the convention is to focus on the need for collective leadership such that farmers own the cause and farmer groups lead in their own region while connecting with others across the country,” says Ashutosh Mishra, spokesperson of Jai Kisan Andolan.

While raising concerns about the new farm legislations, the two-day convention is seeking to provide a platform for farmers from Sunderbans in Bengal, Odisha, Karnataka, Telengana among others. It also has participation of fishermen, who are facing tough challenges due to climate change and increasing pollution of rivers, farmers in tribal belts and women farmers.

Farmers from across the country are expected to participate in different sessions, the organisers’ claim, as the effort is to have large numbers without overcrowding. Bengal farmers’ session is scheduled for Friday.

Pushpendra Singh, president, Kisan Shakti Sangh, says the decision to focus on sugarcane prices was an afterthought given the wide disparity in prices fixed in different states. In Maharashtra, the fair and remunerative price for sugarcane has been fixed at Rs 275 per quintal, which is just Rs 5 higher than last year, though the input costs have risen substantially. In Uttar Pradesh, where farmers have been waiting for clearance of Rs 6200 crore dues, the FRP has been fixed as Rs 325 per quintal, whereas in Haryana sugarcane FRP has been fixed at Rs 350 and in Punjab it is Rs 360 per quintal.

Farmer groups claimed that it is not just the small farmers or those in Punjab and Haryana who are part of the protest but a large number of youth, who feel the need to come together in common cause given that the government has not shown any willingness to address their concerns.